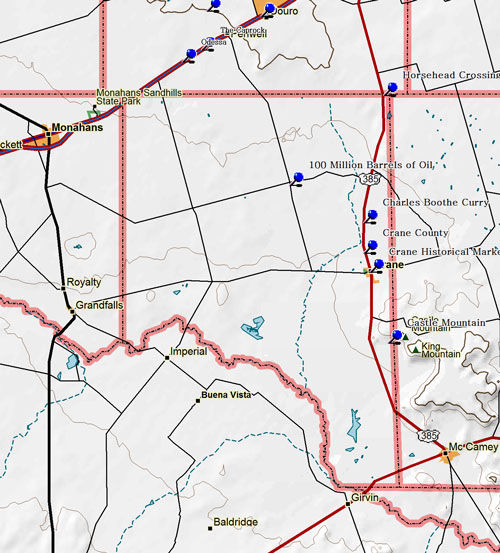 Marker Title: Castle Mountain
City: McCamey
County: Crane
Year Marker Erected: 1966
Marker Location: From Crane, 8 miles S. on US 385 to Roadside Park (marker was in Crane County).
Marker Text: About 3,000 ft. elevation. Since 17th century, a landmark in travel from Texas points to Mexico and California. According to tradition, named by Spaniards for resemblance to ancient castles. Has associations with stories of lost trains of gold and other treasures. Recorded Texas Historic Landmark, 1966.

We received the following e-mail:

The map which you have here shows Castle gap on the wrong end of the mountain. It is between Castle mountain and King mountain closer to Crane. Charlie Marquez.

Marker Title: Juan Cordona Lake
City: Crane
County: Crane
Year Marker Erected: 1965
Marker Location: Courthouse Lawn (Corner of 6th & Alford) Crane
Marker Text: A natural salt deposit, known and used for the past 300 years. On land grant from Mexico to Juan Cordova; name, misread on maps, is now unique to lake. Apaches were encountered here by explorers in 1683. From days of early settlers, Mexicans and Anglo-Texans relied on this salt deposit. During the civil war, 1861-1865, a 7-family San Saba wagon train traded watermelons and other goods to Indians here for sorely needed salt. In 1912-1914 a 36-burro train hauled salt from here. Recently as 1930, commercial shipments went out to Midland and Odessa.

Marker Title: Curry, Charles Boothe
Address: Memorial Gardens Cemetery
City: Crane
County: Crane
Year Marker Erected: 1977
Marker Location: In Crane Memorial Gardens Cemetery on S US 385 (Marker is in center of cemetery) Crane.
Marker Text: Born in the Smith County town of Troup, C. B. Curry became a law enforcement official at an early age. In Jan. 1933, he joined the Texas rangers and served for two years in Falfurrias and San Angelo. He came to Crane in 1935 as special investigator and helped preserve order during the town's oil boom days. He later served as deputy sheriff and chief of police before going into private business. Curry was married twice and had seven children. Recorded - 1977

Horsehead Crossing of The Pecos

Marker Title: Horsehead Crossing, C.S.A.
City: Crane
County: Crane
Year Marker Erected: 1965
Marker Location: In Roadside Park on US 385/67 in far SE corner of Crane County.
Marker Text: One of the most important sites in the old west. Named for skulls pointing toward crossing. Only ford for many miles where animals could enter, drink and leave Pecos River safely. Elsewhere deep banks would trap them. Ford mapped 1849 by Capt. R. B. Marcy, head of army escort for parties on way to California gold rush. Used in 1850's contractor for first mail route from San Antonio to El Paso. As change station, echoed with brass bugle call of Butterfield coach carrying mail from St. Louis to San Francisco, in first stage service to span continent, 1858-1861. During the Civil War, 1861-1865, used by wagons hauling highly valuable salt scooped from bed of nearby Juan Cordona Lake, to meet Texas scarcities. Also scene of spying and counterspying of Federal and Confederates watching Overland Trail. Federal, operating out of El Paso, feared invasion by way of Horsehead. Confederates several times threw back armies that sought to enter the state in order to deploy along the old Overland Trail and conquer north and west Texas. Later this became important crossing for cattle on Goodnight-Loving trail, mapped in 1866. (1965)

One Hundred Million Barrels of Oil From Block 31 Unit

Marker Title: One Hundred Million Barrels of Oil From Block 31 Unit
City: Crane
County: Crane
Year Marker Erected: 1969
Marker Location: 8 miles NW of Crane on FM 1601
Marker Text: A discovery well completed in Nov. 1945 about a mile to the northeast has led to vast production of oil--one hundred million barrels by July 27, 1969. The discovery well, University A No.1 , was drilled by the Atlantic Richfield Company. This development is on land belonging to the University of Texas, designated as Block 31 Unit, and leased to Atlantic Richfield (the operator), Phillips Petroleum Company, Continental Oil Company and Champlin Petroleum Company. The unit--7,200 acres in area--has 72 wells approximately 8,500 feet deep, into the earth stratum known as the Devonian formation. Through the years, unusual processes were used to increase unit oil recovery. High pressure natural gas was injected, to wash oil from subterranean rock. Later, exhaust gas was injected instead of the costlier natural gas. Research and farsighted policies made possible unusually high recovery in this reservoir. Credit for the conservation and good management of this unit goes to the Texas Railroad Commission (as the regulatory body with oversight of oil production), the University of Texas and owners of the unit. Attachment - 1989: A second milestone was reached October 17, 1987, when the two hundred millionth barrel of crude oil was produced from the Block 31 Unit.