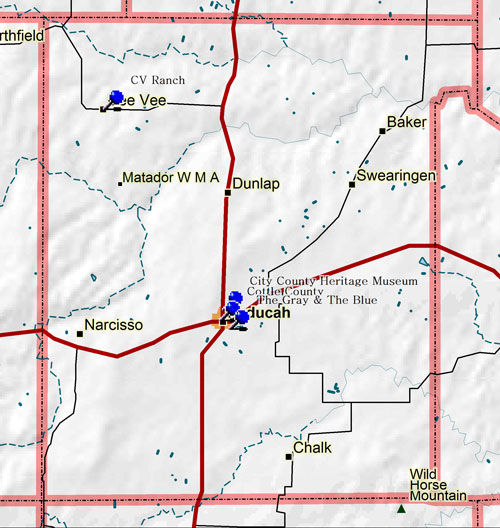 Marker Title: Cottle County
City: Paducah
County: Cottle
Year Marker Erected: 1964
Marker Location: NW corner of Highways 70 & 62, or 8th & Easley Streets, Paducah.
Marker Text: Created in 1876, organized in 1892, in area where the Pease and Little Wichita Rivers break level terrain. Named for George Washington Cottle (1798-1836), an 1832 settler in DeWitt's Colony, who after fighting in 1835 Battle of Gonzales entered the Alamo March 1, 1836, and died there defending Texas. Of the 254 counties, 42 bear Indian, French or Spanish names. 10 honor such colonizers as Stephen F. Austin, "Father of Texas." 12 were named for Washington, Clay and other American patriots. 96 were named for men who fought in the Texas War for Independence (15, including Cottle, dying at the Alamo), signed the Declaration of Independence or served as statesmen in the Republic of Texas. 23 have names of frontiersmen and pioneers. 11 honor American Statesmen who worked for the annexation of Texas; 10 leaders in Texas since statehood, including jurists, ministers, educators, historians, statesman; and 36 men prominent in the Confederacy during the Civil War. 8 have geographical names. 2 were named for battles, 2 for trees, one for a fort. Cottle is noted for fine farms and ranches, with Paducah the principal market and shipping point. (1964)

Marker Title: CV Ranch and Cee Vee Community
City: Paducah
County: Cottle
Year Marker Erected: 1996
Marker Location: 14.8 miles north of Paducah on US 83/62; 9 miles west on FM 1440.
Marker Text: The CV cattle brand was first registered in 1850 in McLennan County by Claiborne Varner. In 1856 his brother in law, J. Wes Sheek, and Sheek's stepbrother Charles Goodnight took the CV herd westward. Sheek bought Goodnight's portion of the herd in 1869, and later moved the cattle to Cottle County. The CV Ranch was established in the northwest corner of Cottle County in the 1880s and originally contained 47,000 acres. The ranch became a large operation under various owners. By 1889 the CV Ranch was purchased by Mill Iron ranch owner Col. W.E. Hughes. The ranch house was located 65 yards west. Following Hughes' death in 1918, his granddaughter Annie C.S. Hughes divided 37,000 acres of the ranch into smaller farms and sold them in 1927-28. The community of Cee Vee developed here and contained four stores, a blacksmith, barber shop, cafes, four churches, and a cotton gin. Cee Vee Mercantile store was located on this site. A post office was granted July 4, 1928. A school was built in 1929. By 1935 about 100 families had settled in Cee Vee. However, drought, the depression, and World War II caused many people to leave the area. By the 1990s about 20 families remained. (1996)

The Gray and The Blue

Marker Title: The Gray and The Blue
City: Paducah
County: Cottle
Year Marker Erected: 1964
Marker Location: Courthouse lawn, corner of Highway 83 & Highways 62/ 70, Paducah.
Marker Text: Into the western part of Texas, about 1885 came Civil War veterans of the Gray and the Blue, to tame the wilderness. They grazed cattle where drought parched the grass. Lived in dugouts. Found daily existence a siege that reminded them of war hardships. On occasional trips into town, verbally refought the war on the Courthouse Square, but lived peacefully together to build a great county. In Cottle County, 85 per cent of the early pioneers had worn the Gray. One out of 3 had been in Texas units. Others, were from Alabama, Arkansas, Tennessee and Virginia. Of the great early brands, most were owned by Confederate veterans, but one in Cottle was run by a strong pro-Unionist. 8,722 Union veterans lived in Texas in 1890. One example in Cottle County at this time was Union veteran, William Frederick Liedtke (1836-1914), who had migrated to the U.S. from Prussia, in 1856. He served as a county official and then as state auditor of Nebraska before settling in Paducah. He was legal advisor, abstractor and Justice of the Peace here. Gray or Blue in the 1860s, the 1890 uniform tended to be cowman's regalia on an American looking to the future rather than at the past. (1964)