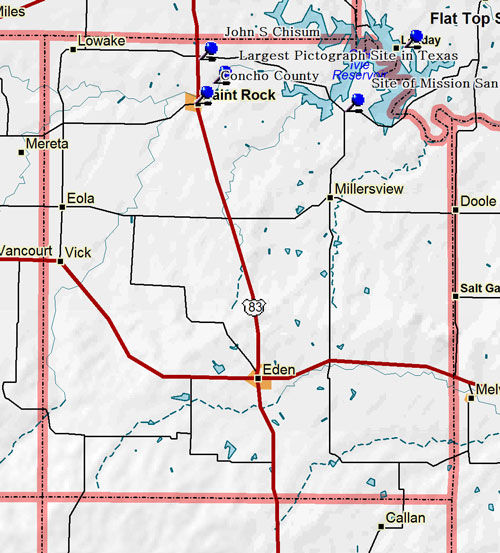 Marker Title: John S. Chisum, Confederate Beef Contractor
City: Paint Rock vicinity
Year Marker Erected: 1965
Marker Location: from Paint Rock, take US 83 north about 4 miles.
Marker Text: (1824-1884) On this site during the Civil War and later, grazed by tens of thousands the Longhorns of cattle baron John S. Chisum. Ranch headquarters were 10 miles east. Here in 1863-1865, Chisum not only ranched but also was buyer of cattle to feed Confederate armies stationed west of the Mississippi River. Born in Tennessee, he came to the Republic of Texas in 1837. After a term as Lamar County clerk, started ranching in 1853. For room to expand, moved his well known "Jingle - Bob" herds to the Concho in 1863. Though he was not the man who gave the name to the famed northbound trail (this was Jesse Chisolm) John S. Chisum's drives were heroic. Herds bound in wartime for Louisiana army camps had to by-pass or to fight Indians, rustlers and occasionally a federal patrol. Concho cattle had to swim across the deep, cold Brazos River. Here cowboys would prod a heavy, wild bull till he was angry; then he would turn on men and horses. Or the Brazos itself killed men and horses. Still beef went through to the Confederates. After the war, Chisum developed ranches in New Mexico and was a bystander in the Lincoln County Wars of Billy the Kid and other desperados. (1965)

Marker Title: Concho County
City: Paint Rock vicinity
Year Marker Erected: 1936
Marker Location: Courthouse square (corner of US 83 and FM 380).
Marker Text: Created February 1, 1858 organized March 11, 1879. Named for the river which the Spaniards called the Concho because of the many shells that they found in it.

Marker Title: Site of Mission San Clemente
City: Millersview vicinity
Year Marker Erected: 1936
Marker Location: 12 miles north of Millersview on FM 2134
Marker Text: At the juncture of the Concho and Colorado rivers. Established March 16, 1684, by the Mendoza Expedition for the purpose of civilizing and Christianizing the Indians of the region.

About 1869, the Kechum Bros, and three or four others, after moving a bunch of cattle to New Mexico, were returning home, and all were killed excepting one man, on the head of the Concho. Joe Warren escaped and reported to Taylor Vandeveer, who was the butcher at Fort Concho. They then reported to the soldiers, who sent out a detachment to bury the dead bodies of the boys that had been killed. Many people were of the opinion that these boys were not murdered by Indians.