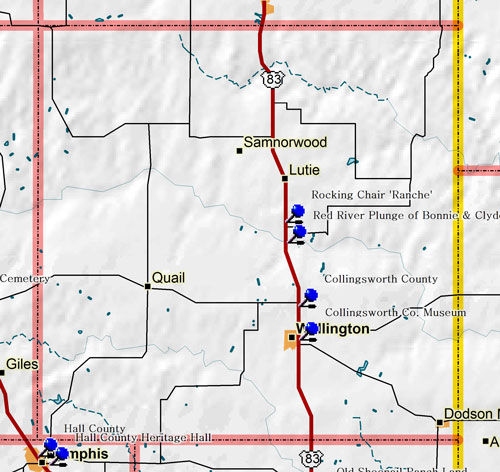 Marker Title: Red River Plunge of Bonnie and Clyde
County: Collingsworth
Year Marker Erected: 1975
Marker Location: From Wellington, take U.S. 83 north about 8 miles to Red River bridge; marker is located on south side of bridge
Marker Text: On June 10, 1933, Mr. & Mrs. Sam Pritchard and family saw from their home on the bluff (west) the plunge of an auto into Red River. Rescuing the victims, unrecognized as Bonnie Parker and Clyde and Buck Barrow, they sent for help. Upon their arrival, the local sheriff and police chief were disarmed by Bonnie Parker. Buck Barrow shot Pritchard's daughter while crippling the family car to halt pursuit. Kidnapping the officers, the gangsters fled. Bonnie & Clyde were fated to meet death in 1934. In this quiet region, the escapade is now legend. (1975)

Marker Title: Collingsworth County
City: Wellington
County: Collingsworth
Year Marker Erected: 1936
Marker Location: From Wellington, take U.S. 83 about 2 miles north; marker located in grove of trees on west side of highway
Marker Text: Formed from Young and Bexar territories; Created August 21, 1876; Organized November 4, 1890; Named in Honor of James Collinsworth 1806-1838; the first Chief Justice of the Republic of Texas; Signer of the Declaration of Independence at the Battle of San Jacinto; Secretary of State in Burnet's cabinet; Wellington, The County Seat.

Marker Title: Rocking Chair "Ranche" (1883-1893)
County: Collingsworth
Year Marker Erected: 1970
Marker Location: From Wellington, take U.S. 83 north about 8 miles to park on north side of Red River; marker located just inside entrance to park.
Marker Text: Owned by Scottish Earls of Aberdeen and Tweedmouth. The headquarters were at Aberdeen (about 7 miles northeast). Starting with 14,745 cattle, the Rocking Chair made profits for a few years, then failed. In north part of county are hills bearing its name. Also, town of Wellington was given that name at wish of rocking chair owners, who had a kinsman die at Waterloo where he was aide to the Duke of Wellington. W.E. Hughes in 1893 bought the land and added it to Mill Iron Ranch. Later the 235 sections were sold to others, to convert to farms and smaller ranches. (1970)