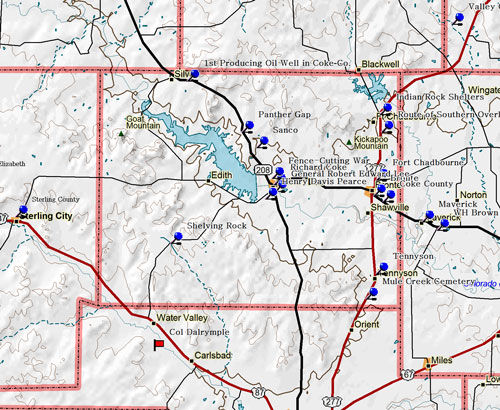 During 1861, Capt. Green Burleson of Bell County was in command of a company at Fort Chadbourne. While on a scout at a point about three miles southeast of Big Spring, the rangers charged a large band of Indians. During the fighting, Green Davidson was killed. One warrior was singled off to himself and some of the boys attempted to make him surrender. When Private Carter approached the savage, this warrior thrust an arrow into Carter's body and killed him. Davidson and Carter were buried far out on the frontier near where they were killed. Others were slightly wounded and the savages lost several of their own number.

Ref.: Mart Flemming, who belonged to the company.

Marker Title: Fence-Cutting War
City: Robert Lee
Year Marker Erected: 1967
Marker Location: Courthouse square, 7th and Austin Avenue.
Marker Text: This area was a center of hostilities during 1880's conflict between landless cattlemen trying to keep use of free grass and open range and those erecting barbed wire fences to create permanent ranches. On L.B. Harris Ranch (3 miles west of here) posts and wire worth $6,000 were burned by anti-fence group during crisis. War was brought on by severe drought in 1880's when men without land found best waterholes fenced in. Many ranchmen owned or leased land they fenced, but some overambitious ones enclosed public lands, farms, and small ranches belonging to homesteaders recently arrived in Texas. Widespread resentment prevailed against these fencers, who, by blocking a road, had little regard for convenience of travelers. When drought pushed landless cowmen to brink of financial ruin, violence was inevitable. They blamed barbed wire fences for their predicament. At first, cutting of fences that blocked roads or waterholes occurred, but soon all fences were threatened. Armed "Nippers" cut fences in almost every Texas county. Fence cutters were then viewed as outlaws rather than crusaders. When laws were passed in Gov. John Ireland's administration to stop the war, Texas had suffered much damage to its property and reputation. (1967)

Marker Title: Fort Chadbourne, C.S.A
City: Bronte County
Year Marker Erected: 1963
Marker Location: City Hall grounds, 100 block of S. Washington St.
Marker Text: Located 8 miles north on old Butterfield stageline. Upon secession, company of First Regiment Texas Mounted Rifles occupied this post to give protection against Indians. Stopover on way west for many Union sympathizers and people wanting to avoid conflict of war. Permanent personnel left the fort in 1862 when the frontier defense line was pulled back more than 50 miles east. However scouting parties and patrols of Confederate and state troops used the fort intermittently in aggressive warfare to keep Indians near their camps and away from settlements and to check on the invasion by union forces. Usually supplying their own mounts, guns and sustenance, these men guarded the frontier until war's end. (1963)

Marker Title: Indian Rock Shelters
Year Marker Erected: 1970
Marker Location: from Bronte, take US 277 north about 8 miles to the junction with SH 70.
Marker Text: Throughout this area during the last several centuries, rock ledges gave protection to Lipan, Kickapoo, Comanche, and Kiowa Indians. In one typical shelter archeologists found evidence of 3 periods of occupation, plus numerous intricate petroglyphs (rock carvings). River shells, turkey and deer bones, flint knives, scrapers, and points lay about the area. One of several hearths (2' x 3' in size) consisted of small pieces of sandstone lining a natural rock trough. On the highest level was found green bottle glass from nearby Fort Chadbourne (1852-1867). (1970)

Marker Title: Mule Creek Cemetery
City: Tennyson vicinity
County: Coke
Year Marker Erected: 1971
Marker Location: 4.5 miles southwest of Tennyson on US 277, at its intersection with FM 2333
Marker Text: Established by pioneers of Mule Creek community, a small frontier settlement founded in 19th century. Said to be named either for (1) an early horse and mule ranch, or (2) a stagecoach mule that died at a creek which runs nearby. The Abilene-Fort Concho stage once served area. For years principal building in here was a combination school church, since 20th century, shift to urban living has diminished population of Mule Creek. Inscriptions of tombstones chronicle history of community. In spring, grounds are covered with bluebonnets, state flower. (1971)

Marker Title: Shelving Rock
City: Robert Lee vicinity
Year Marker Erected: 1972
Marker Location: from Robert Lee, take FM 2034 south/southwest about 16 miles.
Marker Text: Archeological findings at an overhanging rock ledge on Walnut Creek show that the spot, midway between the Colorado and North Concho Rivers, was for hundreds of years campsite or village of nomadic Indians who sought the shelter, running water, wood, and high lookout point above ledge. After 1850, campsite was used in turn by Fort Chadbourne and Fort Concho scouts, surveyors, and line riders of area ranches. There rangers, state militia, and a posse of settlers hunting horses and Indians rendezvoused a few nights prior to disastrous battle of Dove Creek, Jan. 8, 1865. (1972)

Route of the Southern Overland Mail

Marker Title: Route of the Southern Overland Mail
City: Bronte vicinity
Year Marker Erected: 1936
Marker Location: from Bronte, take US 277 north about 11 miles to roadside park.
Marker Text: One mile southeast to Fort Chadbourne, a station on the Butterfield mail and stage line, which linked St. Louis and San Francisco, 1858 - 1861. The fort was established in 1852, occupied until its surrender to state forces in 1861, and garrisoned at times after the Civil War.

Marker Title: Southern Overland Mail, 1858-1861
City: Robert Lee vicinity
Year Marker Erected: 1966
Marker Location: from Robert Lee city limits, take SH 158 east about 5.75 miles.
Marker Text: Passed near this site, providing for the first time combined passenger and mail service between Pacific and Atlantic coasts. Operating west from St. Louis and Memphis, John Butterfield's company used 1,350 horses and mules and 90 Concord coaches and wagons. Stage traveled at a run, despite lack of good roads. A signal given approaching a station would have fresh horses ready and food on the table for crew and passengers. Route had stations 12 to 113 miles apart, and was sometimes changed to get water. Crew and passengers wore guns; to reduce danger of Indian attacks, mules (less coveted than horses) were used west of Ft. Belknap. The trip one way took 25 days -- seven spent crossing Texas, from Preston (now under Lake Texoma) to Jacksboro, Ft. Belknap, Ft. Chadbourne and El Paso. One way fare for the 2,700 miles was $200. Passengers rarely stopped off, because they might not find seats on a later stage. Merchants in Jacksboro and other towns used Butterfield's light freight service to make mail-order sales. Greatest contribution of the overland stage was its carrying news; coaches also brought mail from the west one to 10 days faster than it came by ship. Service was ended in 1861 by the Civil War. (1966) Incise on base: Early Travel, Communication and Transportation Series erected by Moody Foundation, 1966.

Marker Title: Tennyson
City: Tennyson
Year Marker Erected: 1971
Marker Location: On US 277 at its intersection with FM 2333.
Marker Text: In area roamed by Indians for centuries. Tamed by open-range cattlemen in the late 1870's. Permanent settlement began in 1880's. A post office, named for British poet Alfred Tennyson, was established in 1894 with Mrs. Sarah E. Kiser as the first postmaster. Seven persons have held that office to date (1970). Over years, area has had several schools, but all are now closed. Near Mt. Margaret (height 335 feet), once locale of Indian activities, is now site of annual community homecoming (the Saturday before Labor Day) and Easter sunrise religious services each spring. (1971)