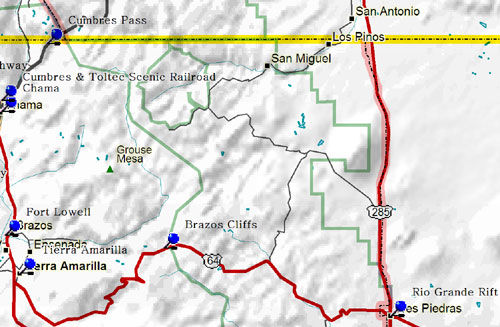 These precipitous cliffs form the western edge of the Tusas Mountains, a Rocky Mountain highland that enters New Mexico from Colorado. They are composed of some of the oldest rock known in New Mexico, the Precambrian quartzite about 1.7 billion year old. Vertical distance from summit to base is more than 2,000 feet.

From a small crossroads town, Chama became an important site on the Denver & Rio Grande Western Railroad after 1880. The Cumbres and Toltec Scenic Railroad is the remnant of the San Juan Extension, a narrow-gauge line which one served the mining areas of southwestern Colorado.

A major encounter between the U.S. Army and a large group of Utes and Jicarilla Apaches occurred here in July 1848. Old Bill Williams, the famous scout and guide, was badly wounded while fighting the Utes, who had once adopted him as a tribesman.

In 1880-82 the Denver & Rio Grande Railroad built the San Juan Extension to serve the mines of southwestern Colorado. The Cumbres & Toltec Scenic Railroad still operates 64 miles of the narrow-gauge system between Chama, N.M., and Antonito, Colorado. Jointly owned by the two states, it is a "living museum" of railway history.

Fort Lowell was established in 1866 to protect the Tierra Amarilla area settlements from the Southern Utes. Originally named Camp Plummer, this post was garrisoned by a detachment of New Mexico Volunteers, some of whose descendents live in the area. The fort was abandoned in 1869 and its log, or "fuerte buildings" sold to local residents.

In 1832 the Mexican government made a large community land grant to Manual Martinez and other settlers, but settlement was delayed by raids by Utes, Jicarilla Apaches and Navajos. Tierra Amarilla, first called Nutritas, became the Rio Arriba County seat in 1880. In 1967 it was the focus of conflicts between National Guardsmen and land rights activist Reies Lopez Tijerina.