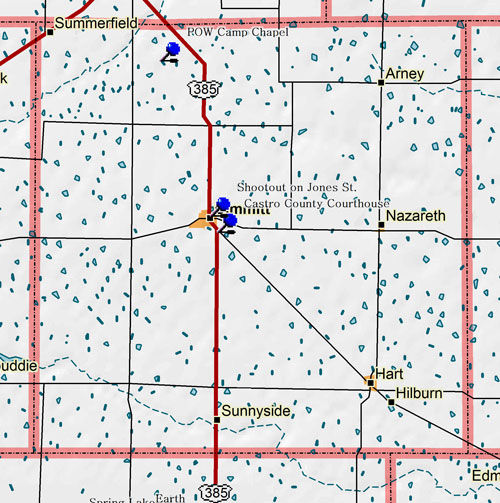 Marker Title: Castro County Courthouses
City: Dimmit
County: Castro
Year Marker Erected: 1986
Marker Location: Courthouse Square, Bedford Street & Broadway-Dimmit
Marker Text: This site was set aside as the Dimmitt town square in 1891, the year Castro County was formally organized. Temporary court facilities were set up in J. N. Morrison's office while the first courthouse was built. An ornate two-story structure, it burned in 1906 after being hit by lighting. A brick courthouse with a central dome, built in 1908, was dedicated at a community picnic. It served until the 1930s, but was razed to make room for the present stone building. Built with Works Progress Administration labor, Castro County's third courthouse opened in 1939. Texas Sesquicentennial 1836-1986

Marker Title: P.O.W. Camp Chapel
City: Dimmit
County: Castro
Year Marker Erected: 1992
Marker Location: from Dimmit take US 385 north 16.5 miles; turn west onto paved road; continues 3.1 miles, then turn south on local road, about .3 miles to chapel.
Marker Text: This chapel is one of the few physical reminders of the days this site served as an Italian prisoner of war camp during World War II. The prisoners, several of them fine artisans and craftsmen, designed and built the chapel, crafting the concrete building to resemble marble. Completed in 1945, the chapel stands as a memorial to the five Italians who died while interned at the camp. A restoration project, begun in 1987, was completed in 1989. Recorded Texas Historic Landmark-1992

Marker Title: Shoot-out on Jones Street
Address: Courthouse Square
City: Dimmitt
County: Castro
Year Marker Erected: 1983
Marker Location: on Jones Street (south) of Courthouse Square, Dimmit.
Marker Text: At an 1891 meeting to discuss the selection of a Castro County seat, words were exchanged between Ira Aten, a retired Texas Ranger speaking on behalf of Castro City, and Andrew McClelland, a spokesman for Dimmitt. The inflammatory remarks led to a gunfight between the two men on December 23, five days after Dimmitt was chosen county seat. In an exchange of shots in the middle of Jones Street, Aten wounded Andrew McClelland and his brother Hugh. Aten was acquitted of the assault charges and a short time later was appointed Castro County sheriff. (1983)