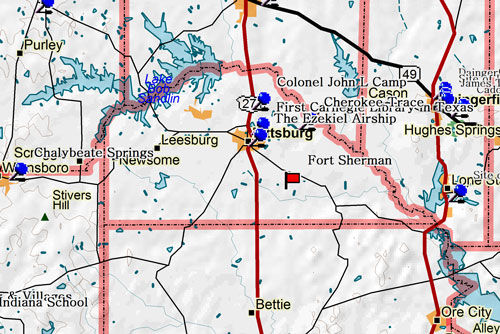 Marker Title: Colonel John L. Camp
City: Pittsburg
County: Camp
Year Marker Erected: 1964
Marker Location: about 3.5 mi. N of Pittsburg on US 271
Marker Text: (1828-1891) Came to Texas from Alabama in 1849. Practiced law and taught school in Gilmer. In Civil War, organized and was elected captain of Co. E, 14th Texas Cavalry (dismounted), unit in famed Gen. M. D. Ector's brigade. In thick of fight, in Tennessee and Georgia, was wounded twice, captured twice, was in prison camp at the war's end. Elected to Congress in 1866, was denied his seat because of Confederate service. Served as district judge and state senator. Campaigned for adoption of Constitution of 1876, to end reconstruction in Texas.

Marker Title: Site of First Carnegie Library in Texas
Address: 200 Rusk St.
City: Pittsburg
County: Camp
Year Marker Erected: 1973
Marker Location: at Marshall St. (SE corner)
Marker Text: At 1898 request of firm mining coal in Pittsburg, philanthropist Andrew Carnegie gave $5,000.00 to match local pledges and build the first Carnegie Library (of 31) in Texas on this site. the masonry building was also the opera house and city hall. Library had 3,000 books. It became a social center, with meeting rooms for clubs and groups such as ladies sewing for World War I hospitals. The opera house staged professional drama and lectures and was used for graduations and recitals until modern school was built in 1926. The library burned in 1939.

Marker Title: Cherokee Trace
City: Pittsburg
County: Camp
Year Marker Erected: 1979
Marker Location: FM 21 ROW, 6 mi. NW of Pittsburg
Marker Text: This Indian trading route to Arkansas and Oklahoma was laid out by Cherokees. A tribesman with a keen sense of direction pulled buffalo hides behind his horse to press down the tall grass. Groups of Indians followed blazing the trail, removing logs and underbrush, and marking fords. Others located springs and good camping places. After the road was established the Cherokees planted roses and honeysuckle which still mark the old trace. After the Indians were driven out, settlers came into texas by this route. The first residents in Camp County lived on the trail.

Marker Title: The Ezekiel Airship
City: Pittsburg
County: Camp
Year Marker Erected: 1976
Marker Location: Fulton St. at S. Market by railroad tracks
Marker Text: Baptist minister and inventor Burrell Cannon (1848-1922) led some Pittsburg investors to establish te Ezekiel airship Company and build a craft described in the Biblical book of Ezekiel. The ship had large, fabric-covered wings powered by an engine that turned four sets of paddles. It was built in a nearby machine shop and was briefly airborne at this site late in 1902, a year before the Wright brothers first flew. Enroute to the St. Louis World's Fair in 1904, the airship was destroyed by a storm. In 1913 a second model crashed, and the Rev. Cannon gave up the project.

Marker Title: Pittsburg
Address: 140 Quitman St. at Market
City: Pittsburg
County: Camp
Year Marker Erected: 1991
Marker Text: Anglo settlement of this area began in the 1850s. The W. H. Pitts (1815-1898) family arrived from Georgia in 1854, and soon were joined by more settlers from the southern United States. Pitts donated land for a townsite, which was named in his honor. In 1874, when Camp County was created from Upshur County, Pittsburg became county seat. Two railroad lines were built through the area by 1880, and in 1891 the citizens voted to incorporate their town. Pittsburg continues to serve as a transportation, business, marketing, and cultural center for the county.

In southwest Titus County, Fort Sherman was constructed where a road from Fort Towson (in Louisiana) going to Nacogdoches crossed the Cypress Creek south of Gray Rock. The exact time it was built is unknown. It was a sturdy fort (which was only two-thirds above ground) made of baked brick with loopholes in each side for shooting. Nothing else is known.