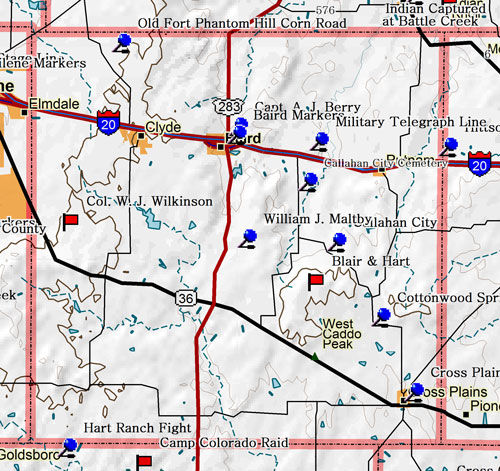 Marker Title: Callahan City Cemetery
City: Baird
Year Marker Erected: 1967
Marker Location: from Baird, take US 80 East about 4 miles, then go south on FM 2228 about 2.5 miles.
Marker Text: Established prior to the organization of Callahan County in 1877. Burial place of many pioneers who came here during era of Indians and great early ranches. Served people of such bygone towns as Admiral, Callahan City, and other neighboring communities. (1967)

Marker Title: Camp Pecan, C.S.A.
City: Baird
Year Marker Erected: 1963
Marker Location: Courthouse grounds, Baird; US 20 Business.
Marker Text: This Civil War camp of the Texas frontier regiment was located 21 miles southeast. Established in 1862 as one of a line of posts a day's horseback ride apart. The number of men guarding the frontier were few. Trouble came from all directions with Indian threats and raids from the west and plundering renegades and deserters from the east. Food, supplies, clothing and horses were constantly scarce. But in spite of all obstacles, these Confederates managed to effectively hold the frontier line of settlement. A Memorial to Texans who served the Confederacy, erected by the State of Texas 1963.

Marker Title: Site of Cottonwood Springs
City: Cottonwood
Year Marker Erected: 1968
Marker Location: On FM 1079 about .2 mile west of FM 880, Cottonwood.
Marker Text: After Indians on High Plains were subdued (1874) by Gen. R.S. MacKenzie, settlers started to pour into this area, where they found abundant game, water, and good soil for ranching, farming. Cottonwood Springs, at head of Green Briar Creek, was one of first villages founded (in 1875). The town soon became a trading center for southeastern part of county. It had several stores, two churches, and a school; and although usually peaceful, it experienced many gun battles. The town name was shortened to "Cottonwood" after first post office was established in 1883. (1968)

Marker Title: Hittson Ranch Headquarters on Battle Creek
City: Putnam vicinity
Year Marker Erected: 1984
Marker Location: from Putnam, take FM 2945 east about 4 miles (on right-of-way).
Marker Text: Nearby Battle Creek was given its name in 1840 by a small band of men who had traveled to this area in search of hostile Indians. A fight took place near the creek when a raiding party attacked the group. Approximately, twenty years later, cattleman John Hittson (1831-1880) established his ranch headquarters at the site of the battleground. The headquarters, used only when cattle were rounded up from surrounding lands, consisted of corrals, branding pens, and a small shelter. It is believed to be the first ranching headquarters established in Callahan County. (1984)