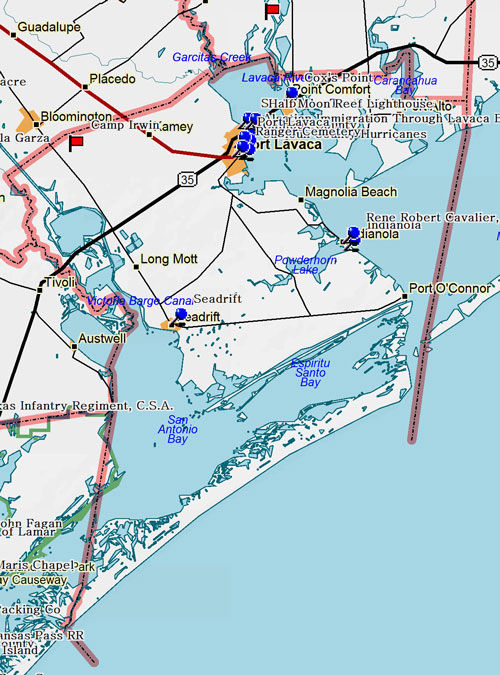 Marker Title: Alsatian Immigration Through Lavaca Bay
Address: 300 block Commerce Street
City: Port Lavaca
County: Calhoun
Year Marker Erected: 1999
Marker Location: 300 block Commerce Street, on bayfront, Port Lavaca.
Marker Text: Texas land empresario Henri Castro contracted to bring colonists of various European nationalities to Texas beginning in 1842. The first of these were Alsatians, most of whom spoke German and held German sympathies. They arrived at Galveston, their official port of entry, with 114 passengers from France in early 1843; most then sailed for Lavaca (later Port Lavaca). They waited here before beginning their overland journey to what became Medina County, to establish the town of Castroville. Another, largely Alsatian, group of 129 arrived at Galveston January 1, 1844. About 40 continued to Lavaca, landing on the 10th. Conditions were difficult, and many immigrants succumbed to various coastal fevers. Other ships followed in 1845 and 1846. Castro's contact expired in 1847, after he had transported more than 2,000 colonists to Texas, most through Lavaca Bay. (1999) Incise on base: Erected by Calhoun County Historical Commission; George Fred Rhodes, Chairman.

Marker Title: Half Moon Reef Lighthouse
Address: Bay Front Park, west end of causeway on SH 35
City: Port Lavaca
County: Calhoun
Year Marker Erected: 1980
Marker Location: Bay Front Park, west end of causeway on SH 35, Port Lavaca.
Marker Text: Constructed in 1858, this three-story hexagonal lighthouse was originally located in Matagorda Bay, at the southern tip of Half Moon reef. The beacon served as an aid to ships trading in Port Lavaca and the nearby town of Indianola (14 mi. SE). During the Civil War the light was disabled by Confederate troops in an attempt to disrupt federal efforts to capture southern blockade runners. The lighthouse was restored to full operation in 1868 and remained in service until 1943 when it was moved to Point Comfort (7 mi. NE). It was relocated here in 1979. (1980)

Marker Title: Indianola
Address: SH 316 terminus at beach
City: Indianola
County: Calhoun
Year Marker Erected: 1963
Marker Location: SH 316 terminus at beach, Indianola
Marker Text: Many currents of the mainstream of Texas history flow in this onetime port. Pineda explored the coast in 1519 and La Salle planted a settlement near here in 1685. Once an Indian trading point, it was a major seaport from 1844 to 1875. Texas colonists, including Germans led by Prince Carl of Solms-Braunfels, entered through Indianola. "Forty-niners", supplies for frontier forts, and experimental Army camels were landed here landed here. During the Civil War Indianola and Fort Esperanza, which controlled the gateway to Indianola through Pass Cavallo, were objectives of Federal blockading vessels. Pass Cavallo, ten miles south, was one of several entrances to the inside waterway created by Matagorda Peninsula and the offshore islands extending to the Rio Grande. To deny Confederate use of this waterway for commerce through Mexico the Federals had to seize control of these entrances. Before Confederate defenses at Fort Esperanza were completed, two Federal steamers slipped through Pass Cavallo to Indianola and on October 31, 1862 demanded the surrender of Lavaca (now Port Lavaca) to the northwest. The Confederate command refused, stood off the naval guns with land batteries, and forced the withdrawal of the Federal ships. Federal forces attacked Fort Esperanza November 22, 1863. The Confederates withstood the assault of naval and land forces for six days then spiked their guns, destroyed their magazines, and withdrew to the mainland. Indianola then fell December 23. On Christmas Eve, Federal and Confederate forces clashed at Norris Bridge, eight miles north. Two days later Lavaca was occupied and the entire Matagorda-Lavaca Bay area remained in Federal control until the war's end. Indianola was partially destroyed by a hurricane in 1875 and completely destroyed by another in 1886. A memorial to Texans who served the Confederacy. (1963)

Marker Title: Rene Robert Cavelier, Sieur de la Salle
Address: SH 136 terminus, Beach Road
City: Indianola
County: Calhoun
Year Marker Erected: 1936
Marker Location: Beach Rd. SH 316 Terminal, Indianola
Marker Text: Born in Rouen, France, November 22, 1643. Came to Canada in 1666. Founded a first settlement near Montreal. Led several expeditions on the Great Lakes and the Ohio exploration of the Mississippi, 1682. On July 24, 1684 La Salle sailed from France to establish a colony at the mouth of the Mississippi. Landed at Matagorda Bay, February 15, 1685. There established Fort St. Louis. While on his way to Canada he was murdered near the Trinity River, March 19, 1687. La Salle's colony on Matagorda Bay gave the United States its first claim to Texas as a part of the Louisiana Purchase. A gentleman but not a courtier, a proud independent yet timid nature, and explorer of bold vision and untiring energy. "America owes him an enduring memory, for, in this masculine figure, she sees the pioneer who guided her to the possession of her richest heritage."

Site of the Town of Linnville

Marker Title: Site of the Town of Linnville
Address: 2 mi. N on FM 1090, 0.8 mi. E on Maxwell Ditch Rd
City: Port Lavaca
County: Calhoun
Year Marker Erected: 1936
Marker Location: From SH 35 in Port Lavaca, take FM 1090 worth about 2 mile to Maxwell Ditch Rd. Follow East about .8 miles then go South at end of Rd. at Bay Meadow Rd. about 13 miles (road will became Meadow Lark Rd) to end. Take private Rd. South at Water Front 1 mile walk at on field area - maker fales water.
Marker Text: An early Texas port named for John Joseph Linn 1789-1885. A pioneer merchant of Victoria who located his warehouse here in 1831. Around this a settlement grew up which was destroyed by Comanche Indians on August 8, 1840.

Marker Title: Port Lavaca
Address: SH 35 between SH 238 & Half Moon Dr.
City: Port Lavaca
County: Calhoun
Year Marker Erected: 1998
Marker Location: SH 35 between SH 238 & Half Moon Dr., at Bauer Community Center, Port Lavaca.
Marker Text: Founded in the aftermath of a Comanche raid on the nearby settlement of Linville, the town of Lavaca ("the cow") was established in 1840. The busiest port in the Matagorda Bay area and a major center for over-land export of cattle and other goods, Lavaca was an able successor to Linville. Lavaca was the first Calhoun County seat from 1846 to 1852, when Indianola assumed the role. The county seat was returned to Lavaca briefly during the Civil War, when the town withstood fire from Federal gunboats, then returned to Indianola. In 1886 Indianola was ravaged by a hurricane and Lavaca was again county seat. With railroad expansion in Texas, Lavaca moved away from cattle and turned to seafood. Called Port Lavaca from the late 1880s, the village boomed. Tourism and the population increased; several factories were opened; the town became a general law city in 1909. The Gulf Intracoastal Waterway was connected to Port Lavaca in 1913 and a seawall was completed in 1920. Shrimp and frozen seafood became major items for export. Natural gas and oil were discovered in 1934 and 1935. From the late 1940s major manufacturing began to contribute to Port Lavaca' s growth. Port Lavaca became a home rule chartered city in 1956, and a deep water port was located here in 1965. Port Lavaca celebrated 150 years of rich history in 1990. (1998) Incise on base: Erected by Calhoun County Historical Commission; George Fred Rhodes, Chairman

Marker Title: Ranger Cemetery
Address: Harbor St.
City: Port Lavaca
County: Calhoun
Year Marker Erected: 1975
Marker Location: Harbor St., Port Lavaca
Marker Text: The oldest known grave here is that of Major H. Oram Watts, the customs collector at Linnville and casualty of a Comanche raid on that nearby settlement, Aug. 8, 1840. The site was called Ranger Cemetery after the burial in 1850 of Margaret Peyton Lytle, wife of James T. Lytle (d. 1854), the "poet" of the Texas Rangers. When an epidemic broke out during the Civil War (1861-65), a nearby house was used as a hospital. At least 10 federal soldiers were among victims buried here. Members of the 5 families who owned the site are also interred in Ranger Cemetery. Last burial was in 1941. (1975)

Marker Title: Seadrift
Address: SH 185
City: Seadrift
County: Calhoun
Year Marker Erected: 1998
Marker Location: SH 185, Seadrift
Marker Text: Settlement here began in the 1840s when German immigrants disembarking at Indianola stayed in the vicinity. A post office was granted in 1888, its name inspired by debris that collected on the shore blown in by heavy storms from the Gulf of Mexico. In 1912 A. D. Powers founded the Seadrift Townsite Company, and the city was incorporated that December. By 1914 Seadrift had 3 churches, 2 banks, 4 hotels, factories, a telephone line, and a weekly newspaper called The Seadrift Success. Despite a severe 1919 hurricane, the city survived. Processing plants were established in the area beginning in the 1950s. The village of Seadrift continues to be a popular resort and recreation spot. (1998)

Twelve miles inland from Port Lavaca, the Second Illinois Volunteers of Brigadier-General John E. Wool established Camp Irwin on August 1, 1846, as a holding camp until their supplies arrived. Nothing remains of Camp Irwin, except a place in history.

This fort was a Civil War earthwork fortification on the east shore of Matagorda Island constructed to guard Cavallo Pass, the entry to Matagorda Bay. It was built in 1861 when it was determined that Fort Washington, a small fort near the lighthouse on Matagorda Island was too exposed. On November 29th, 1863, the Confederates, outnumbered and outflanked, evacuated the fort and it was occupied and repaired by Union forces and they used it as a base of operations for other campaigns in the area. In the spring of 1864, Union troops withdrew from Matagorda Bay and the fort was then reoccupied by the Confederates and held until the end of the war. Eastern walls of the fort were destroyed as the shoreline was eroded by a storm in 1868. By 1878, the rest of the 9-foot-high, 20-foot-thick, turf-covered walls had eroded away. Outlying emplacements and rifle pits can still be traced in some areas. Nothing else remains.