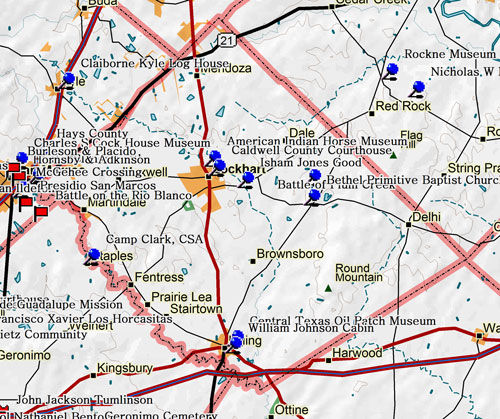 Marker Title: Caldwell County Courthouse
Address: Courthouse Square
City: Lockhart
County: Caldwell
Year Marker Erected: 1976
Marker Text: The first Caldwell County Courthouse was erected on this site in 1848, when the county was organized and named for Mathew Caldwell, a Texas Ranger and signer of the Texas Declaration of Independence. It was replaced in 1858 by a 2-story limestone edifice, measuring 65 feet by 40 feet, with six offices and two rooms for storing records. By 1893, that building had become too small for a growing county. In April 1893, Judge George W. Kyser and commissioners J. H. Jolley, G. A. McGee, C. R. Smith, and R. A. Tiller approved plans for the present courthouse. The cornerstone was laid by Lockhart Lodge No. 690, A. F. & A. M., on August 15, 1893. Contractors Martin, Byrne, and Johnston completed the building on March 19, 1894. The 3-story structure is built of sandstone with red sandstone trim. It displays the fine workmanship and elaborate detail common to architecture of the period. the mansard roof is characteristic of the second empire style that was often used for public buildings. The courthouse is topped by a central clock tower, with additional towers at each corner and flanking the north and south entrances. When it was built, the structure was equipped with the latest conveniences of the day, including electricity.

Marker Title: Caldwell County Jail
Address: Brazos and Market St.
City: Lockhart
County: Caldwell
Year Marker Erected: 1977
Marker Text: Organized in 1848, Caldwell County lost its original log jail in an 1858 fire, then kept prisoners in the Courthouse basement until 1873, when outlaws' activities called for a strong stone prison. In 1908 Caldwell countains voted 725 to 311 for a $25,000.00 bond issue to erect this castellated brick structure. The jailer's quarters occupy the ground floor, over a storage area in the basement. The upper floors contain fifteen cells of concrete and steel, with one cell rising from the center of the building. Gallows are said to have been removed from this jail in the 1930s. Recorded Texas Historic Landmark - 1977

Marker Title: Isham Jones Good
City: Lockhart
County: Caldwell
Year Marker Erected: 1985
Marker Location: 5.45 mi. east of US 183 on FM 20 ROW
Marker Text: Born in Georgia, Isham Jones Good (1813-1866) came to Texas in 1835 with a group of volunteers to join the Texian forces in their war for independence from Mexico. As a member of the Georgia battalion, Good went to the aid of Col. James W. Fannin, but escaped death or capture in the Goliad Massacre in March 1836. After an honorable discharge from military service in May 1836, Good married Melissa Trantham (1811-1870) in Alabama. By February 1838, he had returned to Texas and settled near this site in what was then Gonzales County. As a participant in the 1840 Indian battle of Plum Creek, Isham Good helped open the area to further settlement. He served as first postmaster when the Plum Creek postal station was established. A civic leader, entrepreneur, and land speculator, Good was instrumental in the formation of Caldwell County in 1848 and served as its first sheriff. During the 1850s, Good sold most of his landholdings and moved his family to Bear Creek in Hays County, where he raised cattle until his death. An important local leader during Texas' formative years, Isham Jones Good is buried on his ranch in Hays County.

Marker Title: Battle of Plum Creek
City: Lockhart
County: Caldwell
Year Marker Erected: 1978
Marker Location: Near intersection of US 183 and SH 142 in Lions Park
Marker Text: The harsh anti-Indian policies of President Mirabeau B. Lamar and Mexican efforts to weaken the Republic of Texas stirred Indian hostilities. Hatred increased after the Council House Fight in San Antonio, March 19, 1840, where 12 Comanche chief were killed. After regrouping and making plans for revenge, 600 Comanches and Kiowas, including women and children, moved across central Texas in early August. They raided Victoria and Linnville (120 mi. SE), a prosperous seaport. About 200 Texans met at Good's Crossing on Plum Creek under Major-General Felix Huston (1800-1857) to stop the Indians. Adorned with their plunder from Linnville, the war party stretched for miles across the prairie. The Battle of Plum Creek, August 12, 1840, began on Comanche Flats (5.5 mi. SE) and proceeded to Kelley springs (2.5 mi. SW), with skirmishes as far as present San Marcos and Kyle. Mathew Caldwell (1798-1842), for whom Caldwell County was named, was injured in the Council House fight but took part in this battle. Volunteers under Edward Burleson (1793-1851) included 13 Tonkawa Indians, marked as Texan allies by white armbands. Texan casualties were light while the Indians lost over 80 chiefs and warriors. This battle ended the Comanche penetration of settled portions of Texas. More of the story