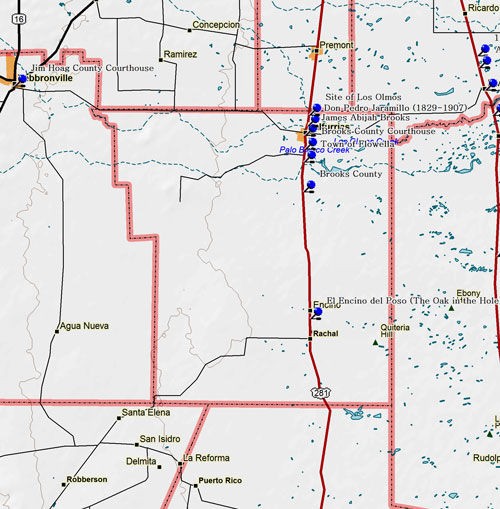 El Encino del Poso (The Oak in the Hole)

Marker Title: El Encino del Poso (The Oak in the Hole)
City: Encino
County: Brooks
Year Marker Erected: 1986
Marker Location: from Encino, take OS 281 bus. south about one mile.
Marker Text: In this vicinity once stood a magnificent live oak tree that was an early landmark on the South Texas Plains for many years. Noted for its size and its wide canopy, it was located in a large hollow created by livestock that gathered beneath its branches and by winds that eroded the exposed soil. El Encino del Poso was a landmark for early trails and land grants. It also served as the location of a stagecoach station and as the basis for naming Encino (1 mi. N). The tree died in the 1890s, before the formation of Brooks County, the victim of an extended drought.

Marker Title: Site of Los Olmos
City: Falfurrias
County: Brooks
Year Marker Erected: 1976
Marker Location: from Falfurrias, take SH 287 N 1 mile, then go E/NE about 2 miles on FM 1418.
Marker Text: The first permanent settlement in Brooks County, Los Olmos was located at the southwest corner of El Paisano Land Grant, given to Ramon de la Garza about 1830 by the Mexican state of Tamaulipas. Situated near the main route to the Rio Grande, the village served a region settled originally by ranchers from Northern Mexico. By 1880, it had a post office, stores, and a school, which operated until 1945. The schoolhouse was the site of services conducted by traveling priests. As the town of Falfurrias grew, Los Olmos began to decline. Descendants of its founders still reside in this area.