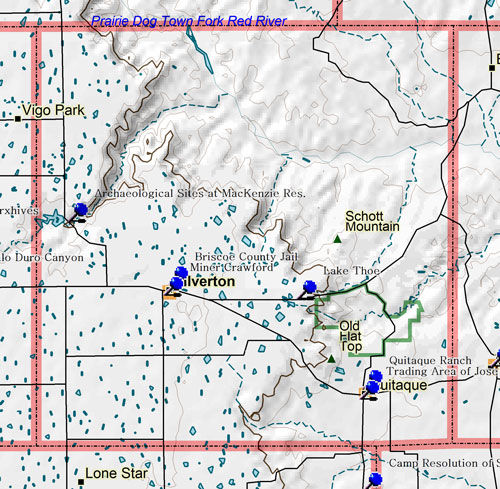 Marker Title: Lake Theo - Folsom Bison Kill Site
County: Briscoe
Year Marker Erected: 1978
Marker Location: At park entrance, take first right turn; continue on road about .7 mile to marker; road is only partially paved.
Marker Text: Stone tool fragments were discovered in 1965 and 1972 on the shores of Lake Theo, named for former landowner Theodore Geisler. Archeological testing in 1974 revealed a campsite and bison butchering and processing area dating back to the age of Folsom man, between 10,000 and 12,000 years ago. Projectile points and scraping tools were found at a depth of four feet, along with over 500 bones from an extinct type of bison. Ponds in Holmes Canyon, now covered by Lake Theo, probably attracted prehistoric men to this area. (1978)

Marker Title: Quitaque Ranch
City: Quitaque
County: Briscoe
Year Marker Erected: 1936
Marker Location: Not located
Marker Text: Established by the Baker brothers in 1877; bought in 1880 for Mrs. Cornelia Adair by Charles Goodnigh. Together with the Palo Duro ranches it embraced more than one million acres acquired by Goodnight in 1887, later broken into smaller tracts. (not located)

Trading Area of Jose Tafoya and other Comancheros

Marker Title: Trading Area of Jose Tafoya and other Comancheros
County: Briscoe
Marker Location: Marker Missing
Marker Text: In Quitaque area, Comancheros (peddlers in Comanche domain) from New Mexico traded flour and other goods to Indians. The Barter (begun in1700's) reached peak in 1864-1868, when Apaches, Comanches and Kiowas rustled horses and thousands of cattle "Down in Texas", to use in trades. Jose Tafoya, who had wagons as well as pack mules, sold guns to Indians until U.S. Army caught and threatened to hang him in 1874 unless he enlisted as a frontier scout. There were many other Comancheros. Tafoya is an example of one who helped rid Texas of Indian marauders. (1969)