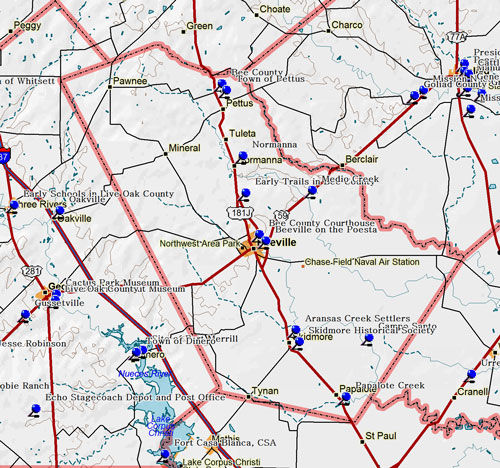 Marker Title: Bee County Courthouse
Address: 105 W. Corpus St.
City: Beeville
County: Bee
Year Marker Erected: 2000
Marker Text: Bee County was created in 1857 from parts of five neighboring counties. The first county seat was located seven miles east of this site, and the first commissioners court was held on the banks of Medio Creek in February 1858. The city's earliest courthouse consisted of a box frame structure. In 1912, local architect W.C. Stephenson designed this, the county's fourth courthouse. A native of Buffalo, New York, Stephenson aided in the design of the death mask of President William McKinley. He was the architect of several Beeville buildings, including the Rialto Theater, two churches and several houses, and later designed the Classical Revival McMullen County courthouse. W.C. Whitney, builder of three other Texas courthouses, contracted to build the Bee County courthouse for $72,050. Whitney died during construction and W.C. Stephenson's partner, Fritz Heldenfels, completed the project. Stephenson drew upon the strong contemporary influence of the French Beaux Arts School with a level of grandeur previously nonexistent in Bee County. Some original Beaux Arts features such as the cast stone balustrade originally outlining the roof were later removed, and the 1943 addition partially obscured the symmetrical plan and façade of the edifice. The Bee County courthouse is a fine example of the Classical Revival style. Of particular significance are the grand portico and projecting pediment entry with Corinthian columns and dentils along the roofline. The Chicago-style windows, comprised of one glass pane flanked by two narrower ones, with transoms above, are noteworthy. Also unusual is Stephenson's lady of justice; unlike most such symbols, she is not depicted as blind. Recorded Texas Historic Landmark 2000

Marker Title: Early Trails in Bee County
Address: 3.6 mi.N on US 181, in roadside park
City: Beeville
County: Bee
Year Marker Erected: 1968
Marker Location: From Beeville, take US 181 north about 3.6 miles to roadside park.
Marker Text: From pack trails and wagon roads that marked this area at least 300 years, have developed such modern roads as U.S. Highway 181. The old trails of Indians, wild cattle and mustang horses formed highways for 17th, 18th and 19th century expeditions coming from Mexico to claim sovereignty for Spain over land of Texas. When pioneers established land grants in this section, they also found Indian trails useful, placing towns along them. Beeville, the county seat, was situated at the natural intersection of San Patricio-Helena Road with Goliad-Laredo Road. About 20 miles south, the Matamoros-Goliad road ("Camino Real" to old-timbers) was probably the most historic road in this area. In the years 1861-1865 the "cotton road"--called "lifeline of the southern Confederacy"--crossed Bee County. A later route of great value was a cattle trail that channeled thousands of Longhorns from the Rio Grande to the Red River and up the Dodge City Trail or the Chisholm Trail to northern markets. In this area were also La Para (or Grapevine) Road; the Indianola-Papalote Road; and a road to now vanished St. Mary's, a port on Copano Bay, off the Gulf of Mexico. (1968)

Marker Title: Beeville on the Poesta
Address: Courthouse lawn, corner of Corpus Christi and Washington Sts.
City: Beeville
County: Bee
Year Marker Erected: 1967
Marker Location: Courthouse lawn, corner of Corpus Christi and Washington.
Marker Text: Long before Mexico granted land (1834) on Poesta Creek to the first settlers, Anne Burke and James Heffernan, savage Indians roamed this valley at will. Their colony, although successful at first, soon met disaster. In 1836 James Heffernan, his brother John, and John Ryan, who had planned to join Texas patriots at Goliad, were planting a crop in a field at this site when they were massacred by Comanches. Also killed was James' family, in his picket house upcreek. Bee County was organized in 1858 and named for Col. Barnard E. Bee, a Republic of Texas statesman. Soon after, choice of a county seat came into hot dispute. A site seven miles east, on Medio Creek, was chosen for "Beeville". But ten months later, voters made the 150-acre donation of Anne Burke "O'Carroll permanent county seat, on the banks on the Poesta. The new town, first called "Maryville" for Mary Heffernan (relative of those killed in 1836) was soon renamed Beeville. In its first decade, it had two stores, one saloon, and a blacksmith shop. First courthouse was built for $750 on west side of present square, 1860. First railroad came through, 1866, and a larger courthouse was soon built. After it burned, the present one was erected in 1913. (1967)

Marker Title: Medio Creek
Address: 4 mi.NE on US 59, then 0.2 mi. E of junction with Medio Creek.
City: Beeville
County: Bee
Year Marker Erected: 1967
Marker Location: From Beeville, take US 59 about 4 mi NE to junction of US 59 & Medio Creek, then continue east 0.2 mi.
Marker Text: Named by the Spaniards about 1800 because of its midway position between the San Antonio and Nueces Rivers. Rises in Karnes County; empties into Mission River. Crossed by explorers, padres, soldiers, settlers who traveled on three early ox-cart roads that led from Mexico to Mission La Bahia at Goliad. The Cart War of 1857, between Texas and Mexican teamsters on the freight route between San Antonio and Gulf ports, originated along San Patricio Road, southernmost of the three roads. The Mexican cart drivers used mesquite beans as feed for their teams, starting the mesquite brush which thrives along creek. Settlers were attracted here by the tall grass, and many veterans of the Texas Revolution were given bounty lands in the area. First post office in Bee County was established in 1857 at Medio Hill pioneer community, once a down-creek settlement. In 1909, the town of Candlish was founded within 50 feet of here, with a hotel, general store, school. The store closed; Candlish became a ghost town. In 1938-39 on Medio and Blanco creeks, fossil beds yielded 1,000,000-year-old fossils of a new mastodon species (named Buckner's Mastodon), rhinoceros, elephants, alligators, camels and three-toed horses. Recorded Texas Historic Landmark, 1967 Recorded Texas Historic Landmark, 1967

Marker Title: Papalote Creek
Address: 20 mi.SE on US 181 in roadside park
City: Beeville
County: Bee
Year Marker Erected: 1965
Marker Location: From Beeville, take US 181 SE about 20 mi to roadside park.
Marker Text: A few yards south passes Papalote Creek, crossed by the fierce Karankawa Indians who found kite-shaped pebbles and named it Papalote, which means "kite-shaped" or "wing-shaped". Along its banks came the leaders of the Power and Hewetson colonists, holding Mexican land grants in the 1830's. On its Rata tributary there is evidence the Mexican Army camped on its way to suppress the Texas Revolution. By 1857 the town of Papalote had emerged. It was the center of entertainment for the county, boasting of a circular dance hall built by cowboys trading steer yearlings at $3 a head for lumber. There were rooster fights, ring tournaments and horse races. In 1886, when the railroad came, the town was booming. After the turn of the century, however, Papalote began to die away. A land company sold lots to settlers from as far away as Hawaii. Expecting to grow citurs fruits, they were disillusioned when the first killing frost doomed the project. Threats of Pancho Villa's raids continued as late as 1916, when women and children hid in a brick schoolhouse. In 1948, Main Street was bypassed by U.S. Highway 181. Today there is no post office--only a rural route for the few remaining households. (1965)

Marker Title: Town of Pettus
Address: 2 mi. north of town on US 181 in roadside park
City: Pettus
County: Bee
Year Marker Erected: 1968
Marker Location: From Pettus, take Hwy 181 about 2 mi. north to roadside park.
Marker Text: Oil capital of Bee County, Pettus was settled in the 1850's when John Freeman Pettus set up his sprawling ranch about 4 miles south of here. The son of one of Stephen F. Austin's first 300 colonists, Pettus was an extensive cattle and horse breeder. The town, previously called "Dry Medio" for a nearby creek, was named for him during the Civil War. The community was in the vicinity of two important Indian skirmishes in Bee County in 1859 and the 1870's; but the town slept until 1886, when the tracks of the San Antionio & Aransas Pass railroad reached this site. It then awoke to become the cattle shipping center for the area. In the same year, John S. Hodges, a pioneer citizen, laid out the townsite and donated land to be used for streets and S.A. & A.P. right-of-way. For years the railroad stockyards and depot were places of bustling activity as freight trains came for loading and wood-burning steam engines took on water. In 1909 the presidential train of Wm. H. Taft stopped at the Pettus water tank. The tank--a final monument to steam railroading here--was razed, 1965. In 1929 the Houston Oil Co. brought in its well "No. 1 Maggie Ray McKinney" and from that time Pettus has played a continuing useful role in Texas economy. (1968)