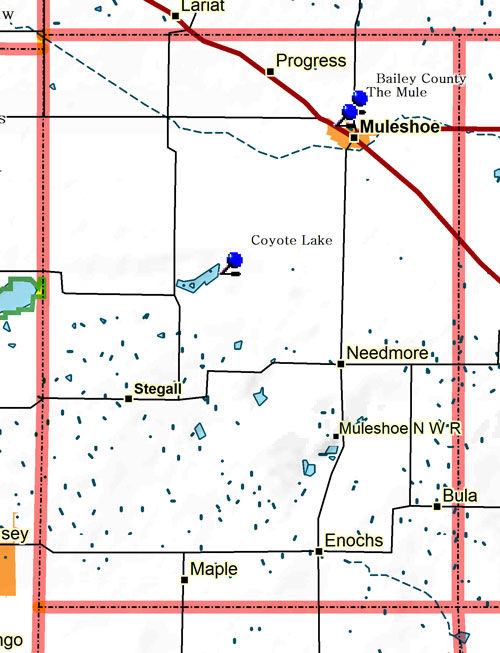 Marker Title: The Founding of Bailey County
Address: 300 S. 1st St.
City: Muleshoe
County: Bailey
Year Marker Erected: 1968
Marker Location: courthouse square
Marker Text: Bailey County was created August 21, 1876, and named for Peter James Bailey, a Kentucky lawyer killed at the Alamo during the Texas War for Independence. This was thinly settled cattle country; Bailey was attached for judicial purposes to Baylor County in 1876-1891, and to Castro County, 1892-1918. In November, 1918, Bailey County was finally organized. Its first officials were W.M. Wilterding, Judge; H.A. Douglass, Sheriff and Tax Assessor-Collector; C.C. Mardis, Clerk; G.P. Kuykendall, Treasurer; E.G. Hoskins, Inspector of Hides and Animals; J.B. Diggs, T.L. Snyder, C.E. Dotson and John S. McMurtry, Commissioners. At the first meeting of the commissioners court, in Blackwater Valley State Bank on January 16, 1919, C.D. Gupton was appointed Justice of the Peace. Muleshoe was designated county seat in a special election, April 12, 1919. A jail cell was purchased in June 1919 from neighboring Parmer County. In July a building contract was let for first courthouse -- a frame structure soon erected at a cost of $2,450. Since institution of its government, this 832 sq. mi. county, with its good water resources, has developed an outstanding agricultural economy. Its progress is a tribute to the standards of its pioneer settlers. (1968)

Marker Title: Coyote Lake
City: Muleshoe vicinity
County: Bailey
Year Marker Erected: 1968
Marker Location: from Muleshoe take SH 214, south about 6.5 miles; turn west onto FM 746, continue about 13 miles to Coyote Lake.
Marker Text: One of numerous natural salt lakes in the Texas Panhandle. Its waters, although brackish, have been welcome enough at various times to Indians, buffalo hunters, and thirsty cattle on hot, dry days. The lake, having a shoreline of over six and a half miles and a bed area of 829 acres, is one of the largest of the many saline lakes in the region. In early days, the Comanches were masters of this area, but after the 1874 Battle of Adobe Walls, they no longer hindered settlement of the Staked Plains. Today, artifacts found near the lake shore show that this was once a favorite Comanche camp site. Even while Indians were still a menace, buffalo hunters swarmed into the Panhandle, and they, too, often camped on Coyote Lake. Until 1877, they killed so many of the huge, shaggy beasts that the southern herd, once numbering millions, nearly became extinct. From 1885 to about 1910, Coyote Lake served as a watering spot for cattle on the huge (3,050,000 acres) XIT Ranch, which blanketed the western Panhandle. In 1898 when the Pecos and Northern Texas Railroad built through Bovina (30 miles north), the lake watered thousands of cattle en route from southern ranches to the railroad, and from there to northern markets. (1968)

Marker Title: The Mule
City: Muleshoe
County: Bailey
Year Marker Erected: 1965
Marker Location: north side of US 84 between Main & 1st Street.
Marker Text: Without ancestral pride or hope for offspring, the mule -- along with buffalo, hound and longhorn -- made Texas history. In war he carried cannon on his back. Because he was available to haul freight, forts rose on frontiers. Indians ate horses hitched to cart or coach, but let tough mule meat go by. His small hooves scaled rock and steep untrod by horse or ox, but big ears endangered him in lake or river. He went fast, endured much, ate sparingly. Since beginning of Christian era, has helped all over world to bear burdens of mankind. (1965)