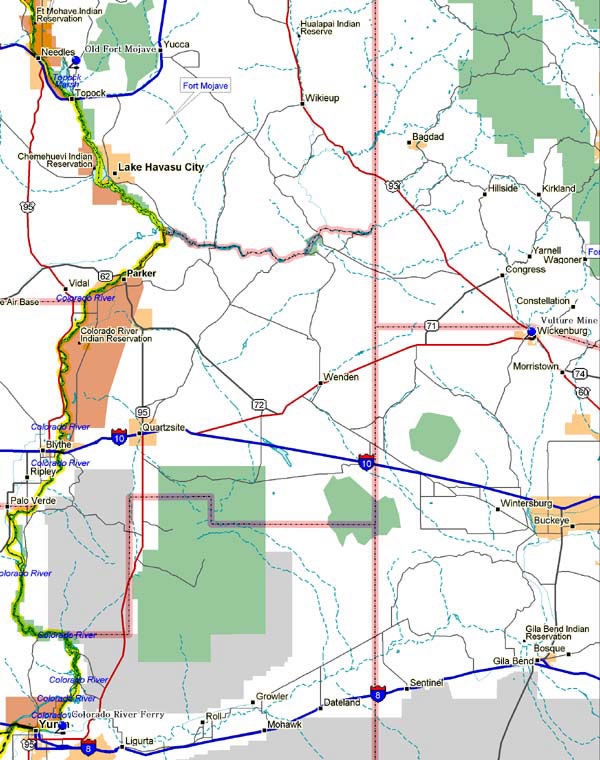 Marker Topic: Colorado River Ferry Crossings - 1850
Address: Below the mouth of the Gila River at new bridge approach
City: Yuma
County: Yuma
Marker Text: From 1850 to 1877 all travelers crossing the Colorado River used the ferry. Several operated between the mouth of the Gila River and Pilot Knob. Steamboats arrived on the river in 1860 and the first railroad bridge was built in 1877.

Marker Topic: Old Fort Mohave - 1858
Address: Beside Colorado, six or seven miles north of Topock, north side of bridge approach
City: Yuma
County: Yuma
Marker Text: Western anchor of a military road across Northern Arizona. Near here in 1858 Beale Camel Expedition was ferried across the Colorado River on the steamer General Jessup. The fort was abandoned at the start of the Civil War, was activated again in 1863 and then in 1880 assigned to civilian use of the Fort Mohave Indian Reservation.

Marker Topic: Vulture Mine -1863
Address: Two miles west of Wickenburg at Vulture Road turnout
City: Wickenburg
County: Maricopa
Marker Text: Discovered in 1863 by Henry Wickenburg and his burrow. To supply the needs of the mines and protecting military camps, the Sal River Valley irrigated agricultural industry was developed. The Vulture Mine produced 10 million in gold and was the greatest single factor in the settlement of Central Arizona. Its discoverer died by his own hand in 1905 at the age of 86.

Marker Topic: Yuma Crossing
Address: Interstate 8, east side of Fourth Avenue
City: Yuma
County: Yuma
Marker Text: First used by Native Americans, this natural crossing served as a significant transportation gateway on the Colorado River during the Spanish Colonial and U.S. westward expansion periods. The surviving buildings of the Yuma Quartermaster Depot and Arizona Territorial Prison are the key features on the Arizona side of the border; across the river, in California, stand the surviving buildings of Fort Yuma, an Army outpost that guarded the crossing from 1850 to 1885.