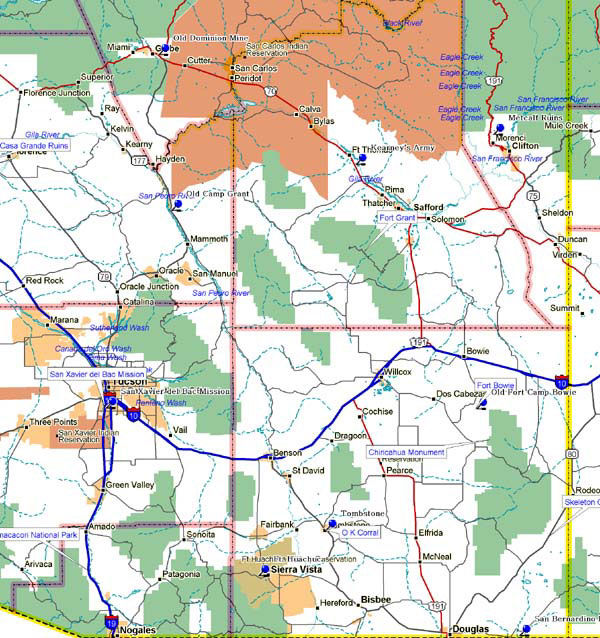 Marker Topic: First Mines - 1873
Address: Beside Old Dominion slag pile between Miami and Globe; on Highway 60 and 70
County: Gila
Marker Text: Included in this historic copper mine are the Globe Ledge silver claims, discovered in 1873, the first to yield profitable ore in the Globe - Miami district. The Old Dominion included many other early claims. Production ceased in the 30s, due to subterranean flooding and the lowered price of copper.

Kearney's Army of the West

Marker Topic: Kearney's Army of the West Cuts a New Road to California - 1846
Address: Along U.S. 70 Between Solomon and Bylas
County: Yavapai
Marker Text: In 1846 General Kearney's Army of the West, guided by Kit Carson, followed the Gila River from New Mexico to the occupation of California in the Mexican War, thus opening the southern snowfree route the Pacific Coast.

Marker Topic: San Bernardino Ranch
Address: 17 miles east of Douglas
City: Douglas
County: Cochise
Marker Text: The center of a cattle ranching empire that straddled the U.S.-Mexico border, this ranch illustrates the continuity of Spanish and American cattle ranching in the Southwest. Until late in the 19th century, the San Bernardino Valley, a well-watered area occupying southern Arizona and northern Mexico, was not successful occupied by Europeans due to the threat of Apache attack; in 1884, however, John H. Slaughter, a Texas cattle rancher, leased a portion of the Mexican land grant and began the development of a ranch that would span up to 100,000 acres, supplying beef, fruits, and vegetables to the surrounding settlements and military posts.

From the earliest times, the Tohono O'odham settlement in which the Mission is located was called Bac, "place where the water appears," because the Santa Cruz River, which ran underground for some distance, reappears on the surface nearby.

The celebrated Jesuit missionary and explorer, Father Eusebio Francisco Kino, first visited Bac in 1692. Eight years later in 1700, Father Kino laid the foundations of the first church, some two miles north of the present site of the Mission. He named it San Xavier in honor of his chosen patron, St. Francis Xavier, the illustrious Jesuit "Apostle of the Indies."

In 1768, Fray Francisco Hermengildo Garces, a man of outstanding personality and prodigious accomplishments among all missionaries in Arizona, established his headquarters at San Xavier. From here this Franciscan Friar set forth on his many missionary explorations.

The present church was built from 1783 - 1797 by the Franciscan Fathers Juan Bautista Velderrain and Juan Bautista Llorenz. Little is known about the actual labor of the construction of the church, who was the architect, who were the artisans, but many believe it was the Tohono O'odham who fufilled these roles. Why the one tower was never completed is still a mystery, but hopefully one day this question will be answered.

San Xavier Mission is acclaimed by many to be the finest example of mission architecture in the United States. It is a graceful blend of Moorish, Byzantine and late Mexican Renaissance architecture, yet the blending is so complete it is hard to tell where one type begins and another ends.

After more than two hundred years, the Franciscan Friars are still here serving the needs of the faithful. San Xavier del Bac Mission is a fully functioning parish church within the Diocese of Tucson. It is a church that primarily serves the Tohono O'odham, but is open to all.

Marker Topic: Tombstone
Address: U.S. 80
City: Tombstone
County: Cochise
Marker Text: Tombstone is one of the best preserved specimens of the rugged frontier town of the 1870s and '80s. Site of one of the West's richest silver strikes and the "gunfight at the OK Corral," Tombstone epitomizes the legendary reputation of the "Wild West" and lawlessness of the 19th century mining camps.