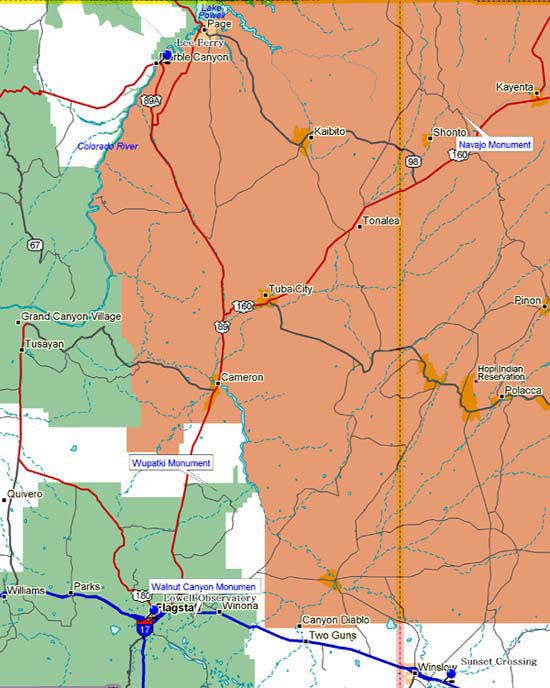 Marker Topic: Lee Ferry
Address: North end of Navajo Bridge
City: Marble Canyon
County: Coconino
Marker Text: From 1872 to 1929 principal route of travel across the Colorado River to Utah settlements. First crossing made at the mouth of the Paria Creek in 186? by Jacob Hamblin. Regular ferry established by John Doyle Lee in 1872. Purchased by Latter Day Saints Church after his death in 1877. Maintained continuously by private and public operators until 1929 when Navajo Bridge was completed.

Marker Topic: Lowell Observatory
Address: 1 mile west of Flagstaff
City: Flagstaff
County: Coconino
Marker Text: Founded in 1894 by Percival Lowell, this relatively small observatory was at the time the one significant center of pure scientific research in the Southwest. Here, Lowell studied Mars (and theorized that it was inhabited by intelligent beings) and performed the computations that led to the discovery of Pluto; Dr. A.E. Douglass' research led to the modern science of dendrochronology; and, in 1912, V.M Slipher discovered that the universe was expanding. The observatory is still in operation.

Marker Topic: Sunset Crossing on the Little Colorado River
Address: South side of U. S. 66 about six miles east of Winslow
City: Winslow
County: Navajo
Marker Text: This was the crossing for Beale's Camel Expedition in 1858 on the military road from Fort Defiance to Fort Mohave. A rocky ledge through a river bed filled with dangerous quicksand, it was used by military travelers and the Mormon immigrants who arrived in Northern Arizona in 1876. Main crossing of the river until the railroad was built in 1882.