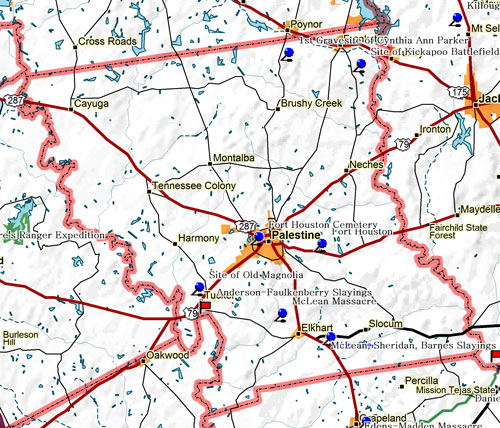 Marker Title: Early Settlers of Andrews County
Address: 700 W. Broadway (SH 176)
City: Andrews
County: Andrews
Year Marker Erected: 1970
Marker Location: 700 W. Hwy 176 or Hwy. 87, (original town square), Andrews (at Chamber of Commerce)
Marker Text: One of last frontiers of Texas. Anglo settlement here lagged 60 years behind rest of state due to Indians and scarcity of water. In 1886 O. B. Holt became first man to file for county land. First settlers included the Cowden brothers and Peter Von Holebeke. In 1900 county had 87 people; it was finally organized in 1910. With windmill pumps and drift fences, ranching became feasible, although soil was so dry that a grazing cow crashed through a dugout roof into a bed one day. In 1930 the discovery of oil brought wealth and rewarded the tenacity of first pioneers. (1970)

Marker Title: Shafter's Trail
Address: On median at intersection of SW 1st and S. Main Sts.
City: Andrews
County: Andrews
Year Marker Erected: 1965
Marker Location: On median at corners of S. Main and 300 SW 1st St., Andrews
Marker Text: In 1875, Col. Wm. R. Shafter and a company of soldiers traveled from Fort Concho (where San Angelo is today) to Monument Springs, New Mexico, charting the arid plains, mapping all the vital watering places. This marker is in the only town of today through which Shafter's Trail passes. Here Col. Shafter, defending his party, chased Indians who ran 12 miles to the northwest. Thus he found the salt lake known ever after by his name. His expedition's maps of this formerly unknown land opened the Permian Basin to settlement. (1965).