About 1871, Joe Hemphill, in company with three or four other boys, was returning home one dark Sunday night, from Veale's Station, where they had attended church. The boys were charged by some horsemen in the dark, who succeeded in killing Joe Hemphill. Some local citizens, however, thought, perhaps he was not killed by Indians. But signs and evidence, later discovered, pointed to the warriors of the northwest.

Note: Author interviewed Cole Miller; and other early settlers of the northern part of Parker county.

The following second version of the story is from the book, Indian Depredations in Texas, by J.W. Wilbarger. 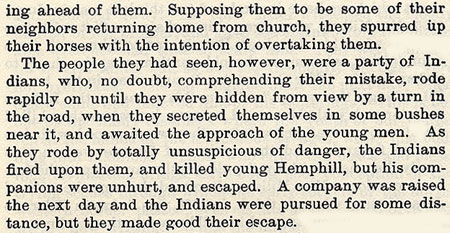