William and Stewart Hamilton and Mr. and Mrs. F.C. Brown

August 10, 1863, Parson J.J. Hamilton, a Christian minister, who lived on Patrick's creek, about nine miles south of Weatherford, sent his sons, Wm. and Stewart, to the parson's tannery, to air the hides. Just before noon, when Wm. and Stewart were returning home, the Indians surrounded and killed each of them. Wm., the older, was scalped, and the savages cut an ear off of Stewart's head.

Savages Storm the Home of Mr. and Mrs. F.C. Brown

F.C. Brown and family lived about one and one-half miles east of Parson J.J. Hamilton's home, and in the same community. Mr. Brown, serving as a soldier in the Confederate army, was gone. Mrs. Harriette Brown, his wife, and their eight children remained at home. The children's names and approximate ages were: Sarah, 16; Martha Ann, 13; Jane, 11; Elizabeth, 10; Moie, 8; Joseph, 5; and twin babies, ten months old, named Tennessee and Estell. 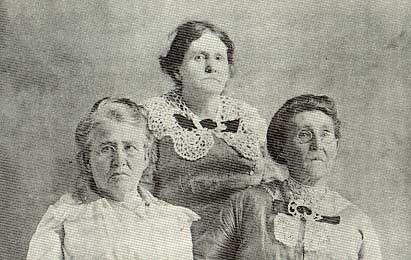 During the preceding night Sarah dreamed the Indians killed her mother; and so strongly was she impressed with the dream, Sarah prevailed on Mrs. Brown to have their neighbor, Mr. Gattling, a gunsmith who lived about 300 yards north, to repair a broken rifle. Mrs. Brown took the gun to the Gattling home early in the morning. But since Mr. Gattling was away, the mother left the rifle at the Gattling residence.

When the Indians were killing Wm. and Stewart Hamilton, they were seen by Mrs. Brown and some of her children. But at the time only thought the Indians cowmen. Joseph Brown was a short distance from the house, on Patrick's Creek, watching Wm. Welch and family wash wool. 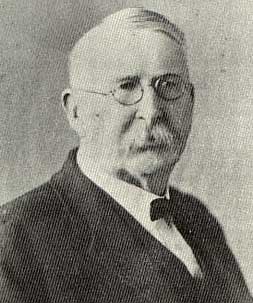 Shortly afterwards, the Indians came to the Brown residence and for the first time the citizens knew the horsemen were warriors instead of cowmen. Mrs. Brown sent Elizabeth down to the creek to notify Mr. Welch and family, and Joseph. But Mr. Welch had already discovered the savages, scattered his family, and made himself and two African boys conspicuous for the purpose of decoying the red man away. The savages followed them for a short distance, and then turned back for what they considered a more valuable prey.

When Elizabeth attempted to return home, she was captured by the savages and placed on a horse behind an Indian.

As the savages approached, Sarah started toward the home of Mr. Gattling with Tennessee, one of the ten month old twins, and was followed by the Indians, who shot her with an arrow under the right shoulder, near the spine. Sarah then quit the road and went into a nearby thicket, and in her wounded condition finally reached the Gattling home with the twin baby. Jane Brown, who is now Mrs. Newt Pickard, of Weatherford, had already preceded Sarah, with Estell, the other ten month's old twin. Martha Ann and Moie had also gone to the Gattling home. Sarah knew that Jane was ahead with the other twin. But Mrs. Brown did not, and thinking, perhaps, her infant baby, Estell was still sleeping on the bed, Mrs. Brown turned back toward their home to get the other baby. Sarah, too, could have reached the Gattling home without being injured. But she lingered behind and was repeatedly telling her mother the other twin was ahead. Mrs. Brown however, in her dilemma did not hear, but hurried back toward the Brown home. This pioneer mother was shot nine times, and killed almost instantly. The savages, however, did not scalp her, perhaps, because she had black hair. Since all Indians are black-headed, as a rule, they are much less inclined to scalp a person whose head is covered with hair the color of their own. After Mrs. Brown had been killed, and the house vacated, the savages ripped open feather and straw beds, took the ticking, bed clothes, and such other trinkets that happened to suit their fancy. While this was being done, and Indian said to Elizabeth, Good Barbeshela. Elizabeth, however, a few seconds later realized her opportune time had come, so she jumped from behind the Indian, and started in a run toward the Gattling home. One Indian exclaimed, She is gone! She is gone! So this little girl, 10 years of age, was followed by a savage, shot in the hip, but made her escape. There were approximately ten Indians in this raiding party, and they next appeared at the Gattling home. A war-widowed daughter of Mr. Welch, and Mrs. Ellis who, also, had a baby, a baby of Mr. and Mrs. Wm. Welch, and Mrs. Gattling and her daughter, Sif, were already at the Gattling residence with no men to protect them, for Mr. Gattling was away. Martha Ann Brown, a girl 13 years of age, had always heard that the savages would not enter a house when the door was shut and guns drawn. And since Mr. Gattling was a gunsmith, she picked up an old gun barrel and stuck it through a port hole beside the door. She then cursed and told the Indians that if they did not leave, she would shoot their brains out. Before she made the statement, the Indians had already begun to dismount. But after the savages saw the gun barrel and heard what she said, they again mounted their horses and rode away. They next appeared at the home of Mr. Beachman, who lived a short distance below Parson J.J. Hamilton's tanning vat. Here the warriors killed Mr. Beachman's dog, but did no further damage. Elizabeth recovered from her wound, but Sarah died about five weeks later. The frontier citizens of this settlement were greatly bewildered after this catastrophe occurred. Mrs. Welch, with a child of her own, and a child of her step-daughter, Mrs. Rebecca Ellis, came to the Gattling home before the Indians were hardly out of sight. Mrs. Ellis, also, went to the Brown home and hid with her child under the floor. But the Indians had already done their dirty work, and rapidly riding away.

Note: Before writing this section the author personally interviewed Mrs. Jane (Brown) Pickard, who carried Estell, the 10 month's old twin; James and Sam Newberry; George Hill; and several others who were living in Parker county at the time.

The above stories are from the book, The West Texas Frontier, by Joseph Carroll McConnell.

J.W. Wilbarger provides another version of the two incidents in his book, Indian Depredations in Texas: 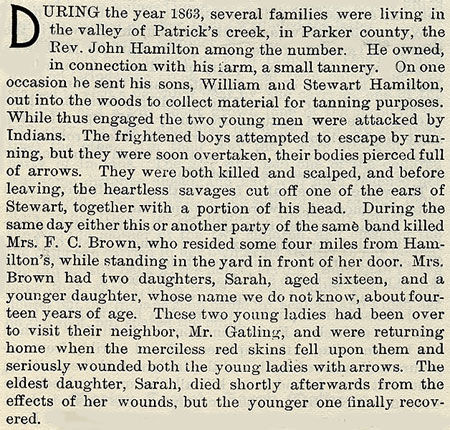