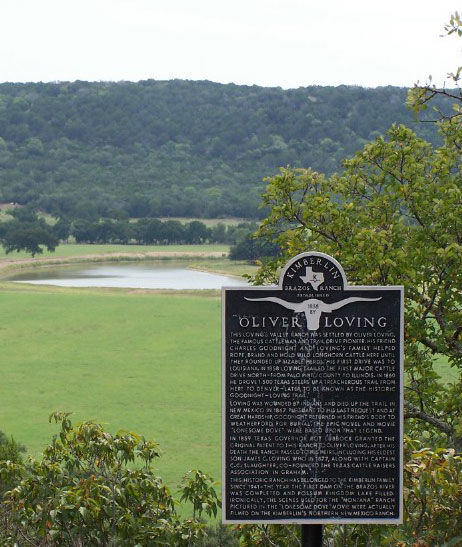 The view of the valley to the south of the Goodnight/Loving marker has several incidences marked by crosses on the map. One that is not marked is at the bottom of the valley where Mr. Davis built a home which boasted the first wooden floor in Palo Pinto County. The lumber was brought in from San Antonio but within a year his wife died and he tore out the floor to construct a coffin.

In the following story from the book, Charles Goodnight, Cowman and Plainsman, by J. Evetts Haley, Goodnight gives an account of an incident that happened in one of their gathering pastures; perhaps the one along Hwy. 16 at Dark Valley.

"About a quarter of a mile below, we sighted two Indians holding a herd of stolen horses. We were going full speed and would have got right on to them before they knew it, had not young Wilson hollered. As soon as we saw the arrow in the horse, he conceived the idea that the Indians had killed his father, as he had not met us per agreement, and I suspected the same thing.

'When Wilson gave the war-whoop the two herders looked around, saw us, lost their heads and started across the valley towards the hills. I went to the right of one of the mottes to cut them off, but when they saw their mistake they abruptly turned back into the nearby timber. This caused me to have to ride much farther than the men coming straight across the valley, who intercepted the Indians, just as they struck the timber, and fired several shots. There I saw a very amusing sight. Sam Ham, a Mississippian about twenty-five years of age, heading the party, got within ten or fifteen feet of the Indians, fired several shots, and missed them. When his old Spanish horse got wind of the Indians, he did some fearful bucking. Ham was a poor rider and when I passed him he was not touching the horse anywhere. He looked like a great spider up in the air, but the horse must have circled around in time for him to 'light the saddle', as Ham stayed on him. My horse was so afraid of the Indians and threw down his head to buck. I spurred and pulled on him so viciously that when he threw his head up he hit me in the face, causing my nose to bleed profusely.

'Just ahead the country pitched off six or eight feet down a rocky bluff. The hindmost Indian-the one I was after-was riding a big bay mare stolen from Parker County. One of the boys, coming up at an angle from behind, fired with a dragoon pistol, breaking the old mare's neck, and she fell over the bluff dead, with the Indian still on her. At this instant I was right about him and saw him 'light on his feet fair and square.'

'Not wanting to jump my horse over, I jumped off and down the cliff, by which time the Indian had gone some little distance. When out on horse-stealing expeditions they always carried one or more ropes, which they drew up through their belts with the loops hanging down. This Indian's rope hung low enough to catch in his feet, which caused him to fall twice and gave me the advantage in the run.

'I had determined not to fire until I was close enough to get him, and as I was getting close he whirled and let an arrow at me. I fired at him instantly, without good aim, but the ball passed through his arm in two places. Fortunately, it was the arm in which he held his bow, which no doubt saved my life, as it caused him to miss his next shot. I have never seen an Indian that could stand powder at close range, and in all my frontier life, I have known but few men who would not flinch when powder was burned so close.

'An instant after he shot, I again fired, hitting him right between the shoulders, and as he went down I gave him another shot in the back of the head, which made a good Indian of him right now..."

This stop is as good a place as any to mention a few points of interest and the Possum Kingdom area. A sign at the top of the rise to the north will lead you to Observation Point, which offers a panoramic view of the lake. Across the lake to your left, you may be able to see a little of the golf course at the Cliff's. This resort also offers splendid overnight accommodations and a good restaurant. The lake also boasts several other recommended places; Lindy's Lakeview Lodge (940-779-2522), which is a great place for catfish, and two RV parks; One Mountain Place (877-779-2333) and a KOA campsite at Willow Beach. Another recommended place is Lumpy's Barbeque, where you will often find Allen "Alley Cat" Ince, the unofficial mayor of Possum Kingdom, playing his guitar when he is not cutting steaks and grinding hamburger at the Trading Post which serves as the lake's semi-supermarket. If you fail to catch him, give him a call at 940-779-2365 for help in arranging fishing trips, boat rentals, parties, float trips as well as information about events in the music scene around the lake.