During 1858, Choctaw Tom and several other Indians, who belonged on the Brazos Agency, camped on Sunday Creek southeast of the present town of Santo. On one occasion, two members of the Lavender family were out cow hunting between Buck and Sunday Creek, and near a point of a hill where two of Choctaw Tom's Indians were stationed. As the Lavenders rode by they were fired upon by these Indians, but fortunately the shot went astray. Capt. John W. Middleton was notified and he immediately recruited a company of seventeen men. Early the next morning the men took the trail of the two Indians and followed it to Choctaw Tom;s camp, which they surrounded. Choctaw Tom appeared and stated that he and his men were peaceable and desired to do no one any harm, but were in that community for the purpose of hunting. Choctaw Tom was then told by Capt. Middleton that much horse stealing was being perpetrated and that the reserve Indians were accused of a large percentage of such crimes. Choctaw Tom replied that such horse stealing was being done by the wild tribes. Captain Middleton answered that the settlers did not know wild Indians from tame ones, that they were hunting the Indians who were doing the mischief and that the trail of two Indians who fired on the Lavenders on the preceding day, had been traced to Choctaw Tom's camp. According to the statements of Mr. Middleton, a laughing Indian stepped forward, and said that he had shot at a deer and not at them. Choctaw Tom then promised to take the Indians back to the reservation.

But Choctaw Tom and his men a few days later camped in Palo Pinto on Town Branch, Due north of the northeast corner of the courthouse square. Here the Indians were kindly received, and we have no record of their causing any trouble to any one. Choctaw Tom and his band remained at this point for several days, and the Indians and white children played together, but due to the solicitation of some of the local settlers, Choctaw Tom and his Indians moved their camp to the Indian Hole on Elm Creek about six miles north and a little east of Palo Pinto, and it was from these Indians this famous fishing hole derived its name.

The next morning just after the break of day, they charged the camp of Choctaw Tom, which was near the Indian Hole, of Elm Creek north of Palo Pinto. The tepees, or small tents of these Indians were located on both sides of a roadway or trail. So Capt. Garland and his men made a surprise attack on the camp, and charged down this roadway between the tepees, and as they did, fired in both directions. Eight men, eight women, and eleven children-making a total of twenty-seven, were in the camp at the time. When the charge was first made, at least a part of the Indians were asleep. But almost immediately the bucks were on their feet and fought in self-defense the best they could. Seven of their number were killed, and eight severely wounded. Four men and three women were killed, and three men, two women, and three children wounded. Two of the seven dead were Caddos, and the remaining five were Anadarkos. Choctaw Tom's wife numbered among the dead, and his daughter had a thumb shot from one of her hands. According to reports, one of the members of Capt. Garland's party held his gun against her bosom and was in the act of firing, when she took the gun and pushed it away only in time to receive the discharge of the rifle through her thumb.

This was indeed a disastrous blow to the entire frontier. Capt. Garland and his men passed through Palo Pinto shortly after the assault and told the people, "We have opened the ball, and others can dance to the music."

Samuel W. Stephens, then seventeen years of age, was killed during the fighting. Since he was shot in the head from behind, it has often been supposed that he was accidentally killed during the firing by one of his companions. J. Barnes was wounded in the side, brought to Palo Pinto and for several days doctored by Dr. S.S. Taylor. He lived for some time, but finally died from the effects of his wound. The good citizens of Palo Pinto brought the body of young Samuel W. Stephens to town, made him a coffin and after his father, John M. Stephens, for whom Stephenville was named, and eleven others from Erath County arrived, he was buried near the present Bankhead Highway, and near the foot of the hill and dipping vat and about one-half mile west of the Palo Pinto Courthouse. Neither the lower or upper graveyard had been started at that time. About two or three months later, the body of young Stephens was removed to the present cemetery on the west side of Stephenville; and today, not far distant from the central portion of the graveyard, a monument shows that Samuel W. Stephens was killed December 27, 1858.

That the citizens were suffering because of the constant depredations of Indians, who belonged on the reservations, cannot be questioned. But the punishment inflicted has often been considered too severe. The invading party reported, however, that it was not their intention to kill or wound any women or children.

This conflict had a far-reaching effect on the frontier, and helped to bring to a critical climax the friction that had been brewing between the settlers and both wild Indians and wards on the reserves. As we have already seen, the wild tribes had never ceased their depredating, and a large percentage of the Indian troubles were traced to the Texas reservations. And prior to this conflict, the Indians in council had declared they were going to wage war on the Texas settlements. Consequently this fight on Elm about six miles north and a little east of Palo Pinto, was considered by many of the early frontiersmen, as the real beginning of the West Texas Indian war, on an extensive scale.

As we have previously pointed out, public opinion was somewhat divided concerning the Indian question. Many people, particularly those that lived near the reservation, were sympathetic toward the Indian. Others who had been greatly aggravated by their dastardly deeds, were greatly embittered towards both the Indians of the reserves and the wild tribes of the west.

Because of the importance of this particular conflict, and the reservation fight that followed, for the benefit of the reader, we shall give several of the reports made at the time, and shortly afterwards by Indian agents, on the one hand and citizens' commissions, etc., on the other. 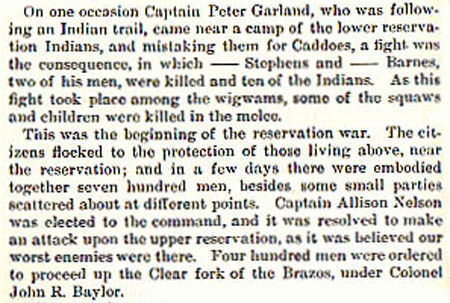