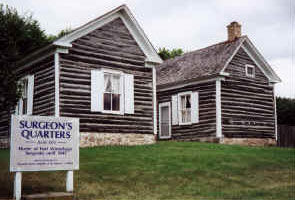 Surgeons Quarters overlooks the site where Louis Joliet and Father Jacques Marquette left the Fox River at the east end of Wauona Trail in 1673.

It was in this area that historic old Fort Winnebago, one of a chain of forts along the Fox-Wisconsin Waterway, was in use from 1828 to 1853. It is situated on the head of the Fox River and is the beginning of the Portage that links Lake Michigan, through the Fox River with the Wisconsin River which empties into the Mississippi. In this area also the French exploring party headed by Louis Joliet and Jesuit missionary Father Jacques Marquette portaged from the Fox to the Wisconsin in 1673, thus opening the route used by

French, British and American fur traders for more than a century.

Surgeon Lyman Foote arrived at Fort Winnebago in 1834. He was probably the first doctor to occupy the house; his predecessors had been quartered in the Fort itself. After Foote's five year tenure, the Surgeons Quarters became the home of Surgeon C.H. Laub who remained until the last garrison left in 1845.

The building and property were ordered sold in December 1853. Jefferson Davis, who had been a young lieutenant in the first garrison, was Secretary of War at the time.

The Surgeons  Quarters, though not within the stockade area of Fort Winnebago, is its only remaining building. It was originally owned by Francois LeRoe, who operated a portaging business and probably built it before 1824. He sold it to the army in 1828. For six years it was a settlers' store and then in 1834 remodeled as a home for Post medical officers and their families. That same year a hospital was built near by. After the evacuation of the fort the Surgeons Quarters was sold and occupied for about eighty years by a succession of families who altered it to suit their respective needs, including using the hospital as a barn.

Acquisition of the Property

The idea of acquiring the home used by the surgeons of the old fort originated with the Wau Bun Chapter of Portage.  In the depression years of the 1930s Columbia County was housing two families of unemployed people in the home. The father of one of them was a taxidermist and a high school student in the area went to him for instructions. It was a chilly day and the taxidermist,deciding to build a fire in the kitchen stove, went up to the attic, returned with laths he had torn out of the walls and built the fire.

The boy told his mother what had happened. She realized that the building would not be in existence long if something was not done at once. She took an option on the property, found other homes for the families, and during the next three years tried to find some organization to take over and restore it. Her search ended when the State Society accepted the challenge.

The interior had been cut up into several smaller rooms in place of the original four; chimneys and fireplaces had been removed.

Following War Department plans which had been used in the remodeling of 1834, the four original rooms were located and partitions restored. Fireplace locations were determined from the old foundations and footings were rebuilt. Pine logs, squared and hewn with axes, form the outer walls, the floor and ceiling joists are of hand hewn tamarack poles. Much of the original flooring is still in place. The walls are

plastered over hand-sawn and hand-tooled lath, a portion of which has been left exposed.

Pine logs in the outer walls, hand hewn tamarack joists in floors and ceilings, bricks for the three restored fireplaces from an old house in Portage made of bricks and stones that were once part of the fort foundations - all contributed to the authentic restoration of Surgeons Quarters.

It is now a true example of the log type house built by French inhabitants of Wisconsin.