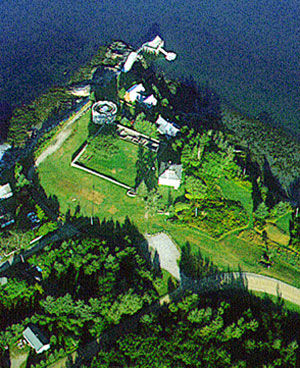 Fort William Henry stood in the large rectangular area defined on site today by low stone walls and a tall stone tower, or bastion. The stone bastion was built in 1908 as a replica of that feature of the fort.

Before Fort William Henry was built in 1692, the Pemaquid settlement and a previous fort, Fort Charles, had been captured by the French and their Indian allies, driving the English to abandon much of the nearby coastal area. By 1691, the English regained authority over the region and built Fort William Henry.

With the construction of Fort William Henry in 1692, England sought to fortify the frontiers of its Massachusetts colony. Pemaquid lay on the northeastern edge of English influence and, as such, occupied a very strategic location.

The fort built here was extraordinary for its time. Massachusetts Governor Sir William Phips spent two-thirds of the colony's budget (£20,000) to construct it. Workers used 2,000 cartloads of stone to build walls 10 to 22 feet high and a stone bastion, which rose to a height of 29 feet. The fort housed nearly 20 cannon and a garrison of 60 soldiers.

For all its seeming strength, Fort William Henry did not last. Native people, upset at their treatment by the English, united with the French to attack the fort in 1696. This fort, which had seemed so strong, proved to be weak. Mortar used to build the stone walls was of poor quality and the fort's interior buildings could not stand bomb attack. The garrisons' water supply lay outside the fort walls. His garrison outnumbered, Captain Pasco Chubb finally surrendered. With the fall of Fort William Henry, the English abandoned Pemaquid once again.

The museum and fort are open daily, Memorial Day-Labor Day

The site includes a reconstruction of Fort William Henry, which also houses museum exhibits. A museum displays hundreds of artifacts found on the site, dating from prehistoric times through the colonial period. Musket balls, coins, pottery, and early hardware are among items of interest. Guided tours are available during the summer months. Contact the Park staff for tour and special event information.The surrounding park, sloping down to John's Bay, is a great picnic spot, accessible all year. (During blackfly season, a reliable sea breeze keeps the insects away.)