The dramatic story of Indian fights and endless patrols, as well as fort construction and camp life, is preserved at the Oklahoma Historical Society's Fort Washita, located near Madill and Durant. 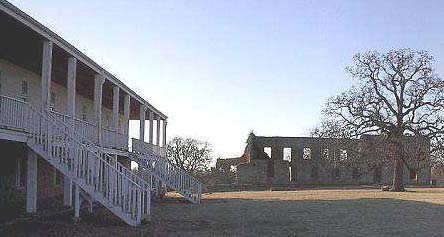 In 1841 Choctaw and Chickasaw Indians were busy building schools and establishing law and order in southeastern Indian territory. Their prosperity, however, was threatened by raiding plains Indians and instability on the frontier. To intercept such raiding parties and to maintain peace, the U.S. Army established Fort Washita.

In the late summer of 1841, General Zachary Taylor, with a small detachment of mounted troopers, rode far into the frontier of Indian Territory, eighty miles west of the nearest fort. His mission was to find the best site for a new military outpost, from which soldiers could protect the Choctaws and Chickasaws.

After thoroughly exploring the wooded region, "Old Rough and Ready" Taylor selected a site eighteen miles north of the Red River on the Washita River, a mile and a half east of the stream. The new fort, occupied in April of 1842, was named Fort Washita.

Isolated even by frontier standards, soldiers moving onto the site for construction experienced supply difficulties. Unlike most military installations, local materials had to be used for construction and food had to be obtained in the area. Manufactured goods from St. Louis and New Orleans were shipped to Doaksville, located near Fort Towson eighty miles to the east, and then moved west on the Red River to the Washita.

Construction was started by Captain George Blake using Companies A and F of the 2nd Dragoons. Because of worn equipment and supply problems, construction was slow. Temporary log barracks were built in 1842 and served until the large south barracks were built in 1850. The supply problem slowed permanent construction and forced the troops to use temporary log structures years beyond the normal period. 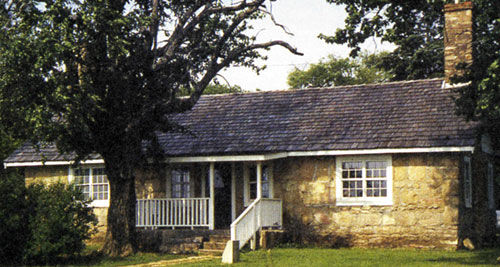 The fort served as a staging area for forays west against raiding plains tribes. The Comanches, styled "Lords of the Southern Plains," proved the most consistent foes of the Washita garrison. Because the columns operating west out of the fort were of necessity made up of cavalry and dragoons, the fort had an extensive corral and stable area, as well as shops for blacksmiths and farriers.

The fort ultimately covered an extensive area. The parade ground was enclosed on the south by the South Barracks, enlisted men's quarters now restored. On the west were the West Barracks (now in ruins), used for enlisted men. To the north was the Commanding Officer's Quarters, and to the east were the Bachelor's Officers' Quarters. Behind and north of the Commanding Officer's Quarters were the Married Officers' Quarters and the new Hospital. South of the South Barracks was the Commissary, the old Hospital, and the Guard House.

Many prominent men served at Fort Washita during its heyday. Among them were General Zachary Taylor, Captains Randolph B. Marcy and George B. McClellan, and General William G. Belknap. In 1854 Colonel Braxton Bragg, later a Confederate general, commanded the 2nd Artillery Regiment stationed at the fort.

Fort Washita was abandoned by federal forces in 1861, soon after the capture of Fort Sumter in Charleston, South Carolina. Confederate forces from Texas occupied the fort, and it became a major supply depot for Confederate troops in Indian Territory. General Douglas Cooper commanded the fort briefly after the Battle of Honey Springs, the largest battle fought in Indian Territory. He is buried at the fort. General Albert Pike served at the fort for a short period, and commanded near-by Fort McCulloch, named for Confederate General Ben McCulloch. Stand Watie, a Cherokee who was a Confederate brigadier general, was one of the officers commanding the southern occupation forces. The fort was also a regional headquarters and hospital facility for southern troops operating in the area.

In 1870 the War Department transferred the fort to the Department of the Interior, and it was never reactivated. Frontier expansion had overtaken the fort and at the time of its abandonment it was militarily obsolete.

From the Department of the Interior the land was turned over to the Chickasaw family of Abbie Davis Colbert and her son. The remaining structures of the fort served as farm buildings well into the 20th century. The Colbert family also utilized the cemetery as a family burial ground. 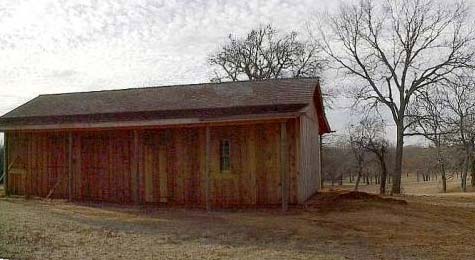