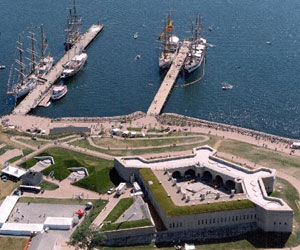 Spectacular fishing opportunities abound with a one-of-a-kind fishing pier boasting over 500' of shore-based access to the major game fish of Long Island Sound. Saltwater anglers will find a unique combination of sport fish including striped bass, bluefish, weakfish and tautog as they feed on the variety of bait fish found at the mouth of the Thames River. In addition to 24-hour access, the pier offers bright lighting and individual pole holders for angler comfort; year-round restrooms and fresh running water.

Since Colonial times Fort Trumbull served as the location of various military forts, schools and research facilities for the United States Army, Coast Guard and Navy. The first Fort Trumbull was built to protect the New London Harbor from British attack and later served as part of the country’s coastal defense system. The masonry fort (the third) that stands today was constructed between 1839 and 1852.

By World War II Fort Trumbull had become home to the Coast Guard, the U. S. Maritime Service Officer Candidate School, and the Columbia University Division of War Research Underwater Sound Laboratory was established there.

In 1970 the Navy merged the Underwater Sound Laboratory at Fort Trumbull with the Underwater Weapons Research and Engineering Station, at Newport RI, forming the Naval Underwater Systems Center (NUSC).

Built from 1839 - 1852, the fortification is one of a group of 42 forts which were constructed for the defense of the coast of the United States, and for defense of the harbors they guarded.  This group of forts became known as the Third System of Fortifications.  Fort Trumbull is unique in the "Third System" because of the Egyptian Revival features incorporated in the architectural design.  The Fort is a wonderful example of its era, a masterpiece in stonework and masonry.  The Fort contains informative markers and displays, a touchable cannon and artillery crew display, and gunemplacements.  The fort interior features 19th Century restored living quarters, a mock laboratory, and a 1950's era office furnished to resemble a research and development lab at the facility.  The public also has access to the ramparts for a spectacular view of the New London Harbor.

The Fort is open Wednesday through Sunday from 9:00 am to 4:00 pm from May 21 through Columbus Day.  The Fort is closed between Columbus Day and Memorial Day Weekend.

The Center contains state of the art multimedia theaters, computer touch screen interactive exhibits, 3-D models, and extensive graphics and text panels.  This one of a kind center depicts over 225 years of military history and technological advances from the Revolutionary War to the Cold War.  Some of the main themes of the Visitor Center are the September 6, 1781 attack by the British under the command of Benedict Arnold, the U-boat menace during World War II, and the anti-submarine efforts during the Cold War.

The Visitor Center will be open Wednesday through Sunday from 9:00 am to 4:00 pm through Columbus Day.  The Center is closed between Columbus Day and Memorial Day Weekend.

There are no fees for parking or visiting the park grounds. A per person charge applies for the Visitor Center exhibit area and Fort Tours.

Heritage Passport allows the bearer to gain admittance to three facilities (Dinosaur, Fort Trumbull and Gillette Castle State Parks) for a one time visitation until Columbus Day of the calendar year in which it was purchased. Children ages 6 -17 are $5.00, adults over 18 years are $12.00, and children under age 5 are free. The Heritage Passport can be purchased at any one of the three facilities.