Preserve historic structures of frontier fort operated from 1820s to 1840s and during Civil War by Confederates, present artifacts to educate public.

One half-mile east and one mile north of Fort Towson community and U.S. Hwy.70. 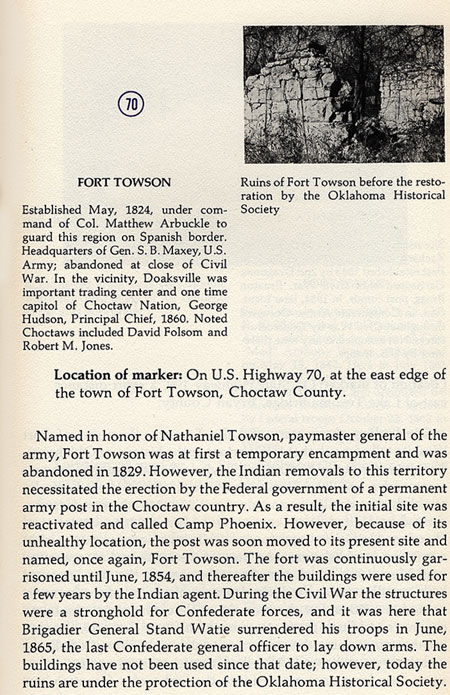 Location of Marker: On grounds of the old Choctaw Chief's house about two miles northeast of Swink, Choctaw County.

Planned by Greenwood LeFlore, the structure was built for the chief of this district of the Choctaw Nation under the provisions of the Treaty of Dancing Rabbit Creek of 1830. Thomas LeFlore, who was elected chief in 1834, was the first resident of the house. It is the oldest surviving structure in Oklahoma.

Location of Marker: About one mile north of Fort Towson, Choctaw County.

Growing around Josiah Doak's store, established in the late 1830s, the town became the commercial center of the region. On November 11, 1847, the name of the nearby post office at Fort Towson was changed to Doaksville. None of the original structures are standing today. It was near here that Brigadier General Stand Watie became the last Confederate general to surrender in the Civil War.

Confederate Brigadier General Stand Watie commanded all Southern troops in the Department of Indian Territory at the close of the Civil War. Although most of the troops had already been sent home, Watie formally surrendered here on June 23, 1865-the last Confederate general to lay down his arms.

Built by the Federal government in 1832 under its treaty obligations with the Choctaw Nation, this house was once the home of the famous Choctaw District Chief Thomas LeFlore. Constructed by government contract workmen from Fort Towson using the $10,000 provided by the Treaty of Dancing Rabbit Creek for its erection, the structure is the oldest home still standing in Oklahoma. Though a portion of the building was destroyed, it has now been restored to its original condition during its occupancy by LeFlore.

Established in 1824, Fort Towson was the principal United States Army post in the Choctaw Nation. Located on a bluff along the east bank of Gates Creek, the post was originally constructed in the shape of a square composed of inward-facing buildings; however, it was later expanded to include several additional buildings outside the original square. Extensive archaeological investigations have been conducted on the site, and the remains of many of the original structures are now visible.

Broken Bow is located in southeastern Oklahoma in McCurtain County along U.S. Highway 70/259 south of Broken Bow Lake and the Ouachita National Forest.