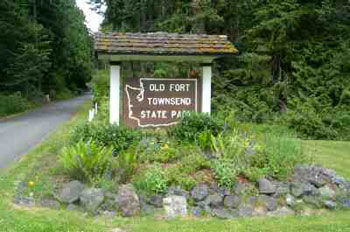 The park consists of slighty more than a third of the orginal Fort Townsend built in 1856 by the U.S. Army for the protection of settlers. Timbers were hewn and laths cut from the forests of the vicinity. The fort was closed between 1859 and 1874 for being "unfit," after an inspection by the commander of the army headquarters in Columbia. Brought back to life in 1874, the fort thrived until 1895 when fire destroyed the barracks. The property was used as an enemy-munitions defusing station during World War II. State Parks took custody of the premises in 1953.

The grounds of both American Camp and English Camp are open all year round, 24 hours a day.
Winter: Closed to camping Oct. 1, reopens April 1.
The respective visitor centers are open during part of the year, typically Spring through Fall from Wednesday to Sunday (8:30am - 4:30pm)