Presently, the fort is open daily from 9:30 am to 5:00 pm, with the exception of Mondays on which it is closed. It is advisable to book tickets in advance for discounted admission and to save time on the day of your trip.

Fort Ticonderoga was built by the French from 1755-1758 as Fort Carillon located above the narrow choke-point between Lake Champlain and Lake George, which controlled the major north-south inland water "highway" during the 18th century. Due to this strategic location the Fort was the "key to the continent" as the superpowers of the 18th century, the French and the British, contested for empire in North America. On July 8, 1758 the Fort was successfully defended by French forces under the command of the Marquis de Montcalm despite overwhelming British forces led by General Abercromby. This was France's greatest victory in the Seven Years' War and a humiliating and devastating defeat for the British. The following year, the British did defeat the French at Fort Carillon under General Amherst.

At the outset of the American Revolution just a half-company of British soldiers manned the Fort. On May 10, 1775, Ethan Allen, Benedict Arnold, and the Green Mountain Boys crossed Lake Champlain from Vermont under cover of darkness. At dawn they surprised the sleeping garrison and overwhelmed them, making Fort Ticonderoga the site of America's first victory of the Revolutionary War. That winter Colonel Henry Knox lead a grueling overland expedition taking cannon from Fort Ticonderoga and Crown Point on sledges to Boston, where General Washington's army was attempting to free the city from British occupation. The cannon placed on Dorchester Heights resulted in the British evacuation of Boston on March 17, 1776.

Work continued at Fort Ticonderoga as it served as an important staging area for the American army while fortifying Mount Independence in Vermont and building extensive defensive works within a 10-mile radius. In addition, the Fort was where vessels for America's first navy were rigged and fitted out. This fleet, under the command of Benedict Arnold, fought the Battle of Valcour Island on Lake Champlain in 1776. Although the American fleet was utterly defeated, the fight stalled the British on their march south. In July 1777 the British commander, General Burgoyne, managed to place cannon on Mount Defiance and forced the Fort's American commander, General Arthur St. Clair to evacuate the Fort on July 6th. One more attempt by the Americans in September 1777 to retake the Fort failed. This was the last major military action to take place at Ticonderoga.

In 1820, William Ferris Pell purchased the ruins of the Fort and the surrounding land to preserve it for posterity. In 1826 he built The Pavilion as a hotel to serve the growing number of tourists who came to see the Fort ruins. In 1908 Stephen and Sarah Gibbs Thompson Pell began restoration of Fort Ticonderoga and in 1909 it was opened to the public with President Taft in attendance. In 1931 Fort Ticonderoga was designated a private not-for-profit educational historic site managed by the Fort Ticonderoga Association. 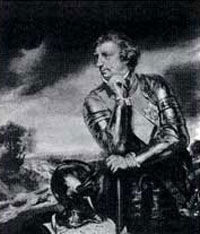 The Battle on Snowshoes refers to two separate military engagements during the French and Indian War. Both battles were fought by members of British Ranger companies led by Robert Rogers against French troops and Indians allied to France, and both took place in northern New York state in the area of Lake George and Lake Champlain. The name for these battles comes from the fact that the British combatants were wearing snowshoes at the time.

The first of the engagements called the Battle on Snowshoes occurred on January 21, 1757, in Canada, New France in the area of Crown Point near Fort Ticonderoga. This battle is sometimes referred to as the Battle of LaBarbue Creek based on author Burt Loescher's erroneous claim that it took place at LaBarbue Creek.

Robert Rogers, a captain at the time, had been leading a scout from Fort Edward, with a stop at Fort William Henry at the head of Lake George to acquire provisions, snowshoes, an additional soldiers. Rogers left Fort William Henry with 86 men including himself, but 12 turned back because of injuries. In the afternoon of the 21st, Rogers' men encountered an ambush of, according to his estimate, '250 French and Indians.' French versions indicate this party consisted of a little over 100 regulars and Canadian militia with several Indians, 'almost all Ottawas' from the Ohio region who were aligned with France.

The fight lasted several hours and ended only after sunset when neither side could see the other. Rogers was injured twice during the battle. In the dark, Rogers and his survivors retreated six miles to Lake Champlain and sent Lt. John Stark with two men to Fort William Henry for assistance in returning to safety. On the 23rd, Rogers, with 48 able-bodied and six wounded soldiers, returned to Fort William Henry. If 54 returned, then 20 men were killed or taken prisoner and in fact French reports claimed they took eight British prisoners.

The French noted that they were at a disadvantage, being without snowshoes and 'floundering in snow up to their knees,' and the British were fortunate in being able to maintain positions on the high ground an behind large trees.

The second engagement called the Battle on Snowshoes, and the better-known of the two, took place in the afternoon of March 13, 1758, on the west side of Lake George, NY. Captain Rogers had been sent on a scout from Fort Edward northwards toward Fort Ticonderoga. General Haviland, who gave the order for the scout, had originally planned on 400 men taking part but reduced that to 180, even though they had reason to believe the French knew of the scout and were expecting 400 Rangers.

The Rangers, which included several soldiers from the 27th Regiment of Foot, the Inniskillings, and from other units, wore snowshoes as they marched through snow 4 feet deep, with a rivulet to their left and a steep mountain separating them from Lake George to their right. Their advance guard saw the enemy and what they assumed was a total of 'ninety-six, chiefly Indians.' Rogers' men immediately engaged the enemy and believed they had routed the opposition but they were soon under attack by an additional force. Rogers estimated the main body to have been 600 French and Indians, while the French report sending 200 'domiciled Indians, Iroquois and Nepissings' along with 30 French regulars.

The Rangers fought bravely, considering they were outnumbered and their numbers fell quickly. They made several successful attempts to prevent themselves from being flanked. But after an hour and a half of heavy fighting, their numbers were too new and they finally retreated. The Rangers lost about 125 who were killed or captured.

Robert Roberts himself was originally reported by the French to have been killed, which in fact was not true. This report stemmed from the manner of Rogers' escape during which he discarded some of his belongings, including his regimental coat, which contained his military commission. This episode also gave rise to the famous legend about Robert Rogers' sliding 400 feet down the side of a hill to the frozen surface of Lake George. While there is no proof of this event, the rock face he supposedly went down has become known as 'Rogers' Slide.'

Fort Ticonderoga is open daily from May through late October.

The King's Garden at Fort Ticonderoga is open during the summer season. Hours for the garden are 10:00 am to 4:00 pm. Admission to the Garden is included with Fort admission.

Fort Ticonderoga also owns and maintains two 18th century military dependencies, Mount Defiance and Mount Hope. Make sure your plans include visits to these two sites. There is no admission charge to visit these sites.

Friends of Fort Ticonderoga and local residents are free, but call ahead to confirm.
Special group rates are available for 10 or more.

The Log House is open daily for breakfast, lunch and snacks.

The Museum Store has a wide selection of gifts and souvenirs, as well as the most comprehensive selection of books on 18th century military history to be found.

The Fort provides unlimited parking for cars and RVs. Pets are not allowed anywhere on the grounds of Fort Ticonderoga. A large picnic area with tables is adjacent to the Log House.

From Montreal Take the Northway (I-87) South to Exit 28. Take Route 74 East 18 miles to Ticonderoga (Village of Ticonderoga is to your right via Route 9N). Continue straight  on Route 74 for 1.5 miles.  Turn left continuing on Route 74. Proceed straight 4/10th mile to the Fort entrance.

From Albany Take the Northway (I-87) North to Exit 28. Take Route 74 East 18 miles to Ticonderoga (Village of Ticonderoga is to your right via Route 9N). Continue straight on Route 74 for 1.5 miles.  Turn left continuing on Route 74.  Proceed straight 4/10th mile to the Fort entrance.

From Burlington, Vermont Take Route 7 South to Route 22A. At Addison turn right onto Route 17. Proceed west to the Champlain Bridge and Route 22. Take NY Route 22 south to Route 74 East.

From Northern Vermont via Fort Ticonderoga Ferry. From Route 22A take Route 74 west at Shoreham Vermont.