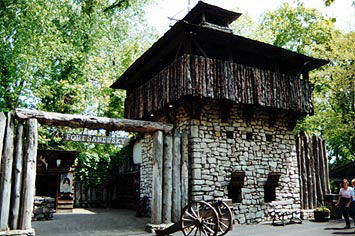 Following the French and Indian War (1756-1763) and the Treaty of Paris (1763), France turned over all of its North American colonies to England. Native Americans became fearful. They had lost their ally and now stood alone against the English. Chief Pontiac of the Ottawa Indians attempted to unite the Native American tribes in the Ohio Country against the British in 1763. This uprising became known as Pontiac's Rebellion.

During Pontiac's Rebellion, Native Americans loyal to Pontiac attacked Fort Sandusky. The English had built the fort, a blockhouse, in 1745. They used the fort off and on between 1745 and 1761 to protect British citizens trading with the Ohio Country natives. During the French and Indian War in 1761, Ottawa Indians loyal to the French attacked Fort Sandusky, burned it to the ground, and killed fifteen of the sixteen men sent to garrison the fort. The only survivor was the fort's commander, H.C. Pauli. The Ottawas took him captive and eventually allowed an Ottawa woman, who had lost her husband, to adopt him. Pauli was able to escape and to make his way back to the fort, which a fresh detachment of English soldiers had rebuilt late in 1761.

To weaken the Native Americans' ability to attack, in 1762 the English government prohibited traders from providing the Indians with guns, razors, knives, hatchets, flints, and gunpowder. Ohio Country natives, especially the Shawnee Indians and the Wyandot Indians, believed that the English intended to weaken them militarily by refusing to trade arms before conquering them. British policy, not to mention the arrival of English settlers, only alienated the Indians. By 1763, conditions at Fort Sandusky had become even more precarious. First, only thirteen men defended the fort. Secondly, England had not garrisoned any of their other outposts in Ohio. When Fort Sandusky came under attack, Pontiac's followers easily conquered the men, killing them all.

Fort Sandusky illustrates the difficulties England had in settling the Ohio Country. Left bankrupt following the French and Indian War, the royal government could not afford to defend adequately its territory from native uprisings. Settlers who ventured west of the Appalachian Mountains remained at the mercy of the Indians. British traders, hoping to form trading relationships with the Native Americans similar to that which the French had enjoyed, faced great economic problems due to English policy. These difficulties would partly be responsible for the coming of the American Revolution. Despite these problems however, it was only a matter of time before the technological and population advantages enjoyed by first the English and then the Americans would drive the natives from the region.

Thanks to Ohio fort hunters, J.D. and Darlene Hindel who provided us with the following information regarding the fort: 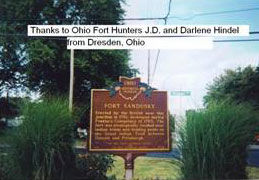 We found the Historical Marker for where Fort Sandusky was originally built in 1761. There is no Fort Sandusky that stands today, the picture that you have listed on your site is a reproduced exhibit at Cedar Point Amusement park. Here are a couple of links to verify this statement :

Here is the correct picture of the Ohio Historical Marker and its exact location near the town of Sandusky, Ohio. Leaving Downtown Sandusky on State Route 6, headed west, you come to a turn in the road where Venice Road turns left onto Freemont Ave, (it's still Route 6.) This historical marker is on that corner. Its not a very big plot of ground and the intersection can be busy. Use caution crossing the road.