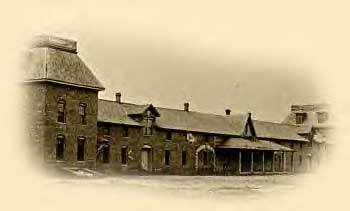 During the summer of 1866, Colonel Henry B. Carrington of the 18th U.S. Infantry led a force of 700 men into the Powder River country to begin construction of the new posts. Carrington's part reached Fort Reno on June 28, 1866. Originally called Fort Connor, the post was located on a high plateau on the banks of the Powder River near the mouth of Dry Fork. Fort Connor had been established on August 14, 1865 by General Patrick Connor during the Powder River Expedition of that summer. November 11, 1865 the Fort's name was changed form Connor to Reno in honor of General Jesse L. Reno, killed September 14, 1862 at the Battle of South Mountain. The post was a crude affair with a warehouse and stables surrounded by a rough cottonwood log stockade and the quarters of both the officers and men were without protection. The buildings possessed earth covered roofs and dirt floors. Company C and D, 5th U.S. Volunteers, and Company A, Omaha Scouts, garrisoned the fort during the winter of 1865-66 but upon Carrington's arrival they were mustered out of the service and departed "without a single regret".

The two years that followed saw troops from Fort Reno engaging in the routine duties of garrison life interspersed with more exciting moments involving Indian warfare. The Fort never came under direct attack from the Indians but encounters with them occurred regularly throughout the area and along the trail to the north and south. The Indians frequently ran off stock, both civilian and military, harassed the emigrant trains, and killed a number of individuals who had wandered from the safety of their respective groups. Unlike Fort Phil Kearny, Fort Reno never gained widespread publicity, notoriety, or folklore fame. This was due in large part to the fact that troops from Fort Reno never participated in any major encounters. Fort Reno's role consisted primarily of insuring that the southern section of the Bozeman Trail was kept open and passable.

Throughout its existence Fort Reno experienced numerous additions, improvements and modifications in its physical layout. Connor's men first built a small stockade of cottonwood logs about 120 feet square. The eight to ten inch logs were set four feet deep in a trench leaving a wall about eight feet high. Inside the stockade was built a quartermaster's and commissary storehouse. Other buildings put up outside the stockade during the fall of 1865 included two barracks, two officers' quarters, a post hospital, shops, teamsters quarters, and two sutler's buildings. Under Carrington's command in 1866a log stockade was placed around the unprotected garrison buildings complete with log bastions on the northwest and southeast corners. A sturdy adobecommander's quarters was also built during 1866. In 1867 Commander Van Voast relocated the entire west stockade line, tore down the old bastions, and built three new hexagonal blockhouses, a new square bastion, and relocated several of the gates. The construction of a guardhouse and additional warehouses rounded out the improvements. Apparently no further building was done at Fort Reno prior to abandonment in 1868. In accordance with the Fort Laramie Treaty of 1868, Fort Reno was abandoned in August of the same year. Shortly after the military left, the entire post was destroyed by fire. Bodies left in the post cemetery were later reinterred and placed at the Custer Battlefield National Cemetery during the 1880s. The grounds that comprise the Fort site have generally returned to a natural prairie sod cover.

There is a marker at the site located approximately 12 miles northeast of Sussex.