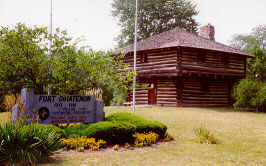 Fort Ouiatenon was the first fortified European settlement in what is now Indiana. It was established by the French in 1717 at a site five miles southwest of Lafayette as a military outpost to prevent British expansion into the Ohio and Wabash country.

As buffalo, beaver, and other fur-bearing animals were abundant in the area, the fort served as a trading post and stopping point for the voyageurs from Quebec. Further, the French were interested in converting the "pagan" Natives to Catholicism. Thus, Ouiatenon's establishment was based on defensive strategy, the quest for wealth, and missionary zeal.

Between 1720 and 1760 the settlement at Ouiatenon prospered and grew. French voyageurs annually descended the Wabash to trade their goods for furs trapped by the Native people. Some remained there to establish homes.

An early visitor describes Fort Ouiatenon as "the finest palisaded fort in the upper country, consisting of a stockade and a double row of houses." Within the stockade, in addition to the double row of ten houses, were a chapel, a blacksmith's shop, and trading areas. Around the walls of the fort were as many as 90 houses of French, Natives, and mix-bloods. At its height there may have been as many as 2,000 to 3,000 inhabitants in the general area.

This generally tranquil era continued until the French and Indian War (1754-63). The French lost all of their North American lands to England as a result of this war, including Ouiatenon which was taken for Britain by Lieutenant Edward Jenkins and a garrison of troops from Detroit in 1761.

After "Pontiac's Uprising", Ouiatenon was not regarrisoned. It remained a small French trading and trapping settlement as well as a large Natives community. In 1778 just 12 households remained at the post although the nearby Wea village was believed by the British Governor of Vincennes to have 1,000 braves capable of bearing arms. 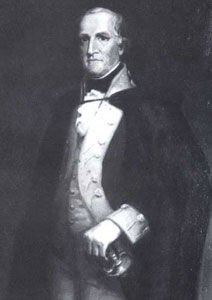 Photo of George Rogers Clark from the book, Encyclopedia of American Indian Wars, by Jerry Keenan.

A British agent occupied the post briefly to spy on the Americans in 1778. He abandoned the fort to George Rogers Clark's men, under the command of Captain Leonard Helm. Helm got pledges of loyalty to the American cause from the residents and then rejoined Clark at Vincennes.

For a while after the Revolution, Fort Ouiatenon remained a settlement for a small number of French inhabitants and was a popular meeting place for local tribes. The Natives, however, realizing that the flow of white settlers from the east would not halt, began to use Ouiatenon as a staging ground for raids on Kentucky settlers. In 1786 the Ouiatenon inhabitants were forced to evacuate the post for fear of their lives.

Finally, in 1791, President George Washington ordered the destruction of the Wabash Native villages. This command was carried out by General Charles Scott who burned all crops and houses, bringing the era of Ouiatenon to an end.

Ouiatenon lay in ruins when white settlement began to grow in its neighborhood in the 1820s. Its existence was slowly forgotten until even its exact location was no longer known.

The blockhouse at Ouiatenon is open weekend afternoons during the summer

The interior of a French trader's cabin has been recreated on the ground floor of the blockhouse to offer a glimpse into life at an 18th century French post.

The Feast of the Hunters' Moon is generally held at that location in October.