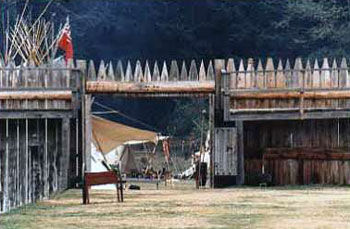 Fort Nisqually was the first European settlement on Puget Sound. The Hudson's Bay Company (HBC) of London, a vast fur trading enterprise chartered by King Charles of England in 1670, established it in 1833. The original site was on the beach and plains above the Nisqually River delta in the present town of DuPont, Washington. Today Fort Nisqually, including two of the original buildings, is located inside Tacoma's Point Defiance Park. Fort Nisqually is owned and operated as a historic site by Metro Parks of Tacoma.

Fort Nisqually never had a military purpose, but the palisade does resemble some frontier army stockades. It was only occasionally visited by American and British military personnel during its active years. The 1846 treaty between the United States and Great Britain established the boundary between the two country's claims at the 49th parallel. This treaty left Fort Nisqually on American soil. With fur trade profits declining, increasing competition from American settlers, and mounting harassment from American revenue agents and tax collectors, Fort Nisqually was closed in 1869. The United States government, under the 1846 treaty agreement, paid the HBC $650,000 for Fort Nisqually and the Puget Sound Agriculture Company lands.

One hundred years after construction and 65 years after closing, major efforts were undertaken to preserve the few remaining structures. Only the Factor's House and the Granary had avoided disrepair and decay. Civic minded citizens moved those two historic buildings and re-created several others to present Fort Nisqually as it was in 1855.

Today Fort Nisqually hosts 90,000 visitors annually at a beautifully restored site. Seven structures are open when trained staff are present during the summer months and during living history events. The Factor's House is currently being restored to original 1855 conditions, when the building was brand new. Artifacts of the era are being collected for display. The small museum is open, as is the gift shop. The Granary, the oldest building on Puget Sound, is open. The Blacksmith shop and the laborer's dwelling house are historically accurate. Living history re-enactors are often available for interpretation of the detailed history of Fort Nisqually.

Fort Nisqually stands as a memorial to the servants of the "Honorable Company of Gentlemen out of Hudson's Bay" who risked their hides for skins in the Pacific Northwest. Please come to visit Historic Fort Nisqually for a World-Class adventure into your past.