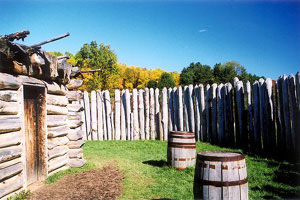 On January 1754, colonial Governor Dinwiddie of Virginia sent 22 year old Lt. Colonel George Washington to build a roadway through the forest that would allow greater numbers of troops and equipment to enter the region. After completing the road in May 1754, Washington and his party scouted out an area which was known as the great meadows and decided that this would be a good choice for an encampment. Told by Indian guides that an advance party of French soldiers was nearby, Washington and approximately 40 of the colonials set out to locate them. On the morning of May 28, 1754, Washington's party encountered a small group of French troops, under the leadership of Joseph Coulon de Villiers, Sieur de Jumonville. In the Battle of Jumonville Glen, 10 French soldiers were killed and 21, including Jumonville, who was wounded, were captured. It has never been determined who initiated the first shots, but what has become known as the Jumonville affair, has been credited as the commencement of the French and Indian War, or as it is known in Europe, the Seven Years' War.

After returning to the great meadows, Washington decided it prudent to reinforce his position. Supposedly named by Washington as Fort Necessity or Fort of Necessity, the crude palisade they erected was hoped to be at least temporarily sufficient to protect their position. By June 12, 1754, Washington had under his command 293 colonials and nominal command of 100 additional regular British army troops from South Carolina. Washington spent the remainder of June 1754 fortifying his position and extending the wilderness road further towards the forks of the Ohio.

On July 3, 1754, in the Battle of the Great Meadows, 600 French troops led by Capt. Louis Coulon de Villiers, the brother of Jumonville, along with 100 Indians, attacked the fort. Throughout the day, heavy rain swamped the low lying fort making the use of firearms difficult and ruining much of the gunpowder and provisions. Late in the day, seeing that their position was untenable, Washington accepted a truce which allowed the peaceful withdrawal of his forces which he completed on July 4, 1754. The French subsequently occupied the fort and then burned it.

Attempts to preserve the location of the fort were undertaken and on March 4, 1931, Congress declared the location a National Battlefield Site under management of the War Department. Transferred to the National Park Service in 1933, the park was redesignated a National Battlefield on August 10, 1961. As with all historic sites administered by the National Park Service, the battlefield was listed on the National Register of Historic Places on October 15, 1966. Subsequent archeological research helped to uncover the majority of the original fort position, shape and design. A replica of the fort was completed in the 1970s. A visitor center, which also is home to a National Road interpretive center opened back in 2005.

Free as of 2016
Schools and educational groups should schedule in advance. Mid-April through early June often fill early.

The park is open daily from sunrise - sunset, all year.