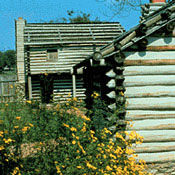 Take a self guided tour of the reconstructed fort located in downtown Nashville.

High on limestone bluffs along the river, a crude log fort, whose original was built in 1779 to protect and shelter early settlers, overlooks Nashville. This painstaking re-creation, built in 1962, serves as a monument to courageous city founders. In five log cabins, costumed interpreters evoke the indomitable spirit of the American age of settlement. 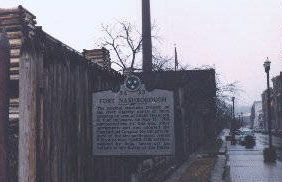 On April 2, 1781, a force of Chickamaugans led by Dragging Canoe attacked the fort at the bluffs. The Indians succeeded in luring most of the men out of the fort and then cutting them off from the entrance. But the whites managed to escape back to the fort while the Chickamaugans captured their horses. They also had help from the fort's dogs, turned loose by the women.

Dragging Canoe had promised to make the settlers pay a "heavy price" if they moved here. He kept his word.

Richard Henderson convinced a few Cherokee chiefs to sell the tribe's claim to the area in 1775. This was an important hunting ground for the Cherokee and many other tribes, some of whom also had a claim to the area. Dragging Canoe and his followers strongly objected to the sale. During the negotiations Dragging Canoe predicted that selling the land would result in the extinction of the Cherokee. He refused to consent to the agreement, and warned that he and his warriors would fight for the land. They considered Henderson's Purchase to be illegal. Under Cherokee law cessions of tribal territory had to have unanimous consent of the tribe.

The American Revolution broke out one month after the Henderson's Purchase treaty was signed. Most Cherokee towns tried to stay neutral, but Dragging Canoe considered the war an opportunity to resist the white encroachment on Cherokee territory. American raids against his towns in east Tennessee forced Dragging Canoe to move them farther to the southwest. In 1779 they settled on Chickamauga Creek near Chattanooga, and became known as the Chickamauga band of Cherokees.

No attempt had been made to settle the area involved in Henderson's Purchase during this time. Then, in late December of 1779, James Robertson led a group of men from East Tennessee to the French Lick on the Cumberland River. John Donelson led another group that traveled in several boats down the Tennessee River and back up the Cumberland to join Robertson's group at the Lick.

Donelson's group was the first to suffer from Dragging Canoe's promise. On their way to the Lick they had to pass the Chickamauga towns on the Tennessee River. Near Chattanooga the Indians attacked them and managed to capture one boat with twenty-eight people on board. But most of the whites reached their destination. They built Fort Nashboro and other fortified "stations" in the area.

Attacks on the Cumberland settlements began soon after Donelson's group arrived in the spring of 1780. Small parties of Chickasaws, Creeks, Chickamaugans, and possibly Delawares and Shawnees, began raiding the outlying cabins and harassed the whites as they traveled between the stations.

The Chickasaw attacks decreased the following year. Because of their political situation, they decided to make peace with the settlers. Piomingo, an influential Chickasaw leader, considered the Cumberland settlers to be less of a threat than the Spanish government.

The Chickamaugans and their Creek allies continued attacks on the settlements for the next fourteen years. The "settlers" had to be on guard against Indian attacks at all times.