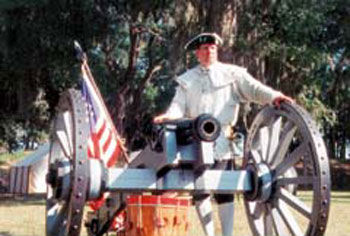 The Fort Morris site was originally a Guale Indian village, closely tied to the settlements and Spanish missions on nearby St. Catherine's Island. It was here, on February 21, 1734, that General James Oglethorpe, founder of Georgia, held the first Masonic meeting in the new British colony. The American Revolution brought considerable changes to the region. In 1776, delegates attending the Continental Congress recognized the strategic importance of having a fort to protect Georgia's middle coast from attack by the English navy. On a low bluff of the Medway River, near the important colonial seaport of Sunbury, a fort was constructed and garrisoned by 200 patriots. Fort Morris defended Georgia against the British again during the War of 1812, when it was known as Fort Defiance.