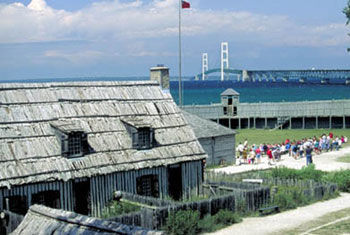 Fort Michilimackinac (pronounced Mish-i-li-mack-i-naw) was a strategically located fortified trading post. The fort, established in approximately 1715, was not built primarily as a military facility but as a link in the French trade system. In 1761 the French relinquished the fort to the British who had assumed control of Canada as a result of their victory in the French and Indian War. Today, a recreation of the original fort is open to visitors.

Fort Michilimackinac was built by the French on the south shore of the Straits of Mackinac in approximately 1715. Previously, French presence in the Straits area was focused in what is now St. Ignace where Father Marquette established a Jesuit mission in 1671 and Fort de Baude was established around 1683. In 1701, Cadillac moved the French garrison from St. Ignace to Detroit, which led to the closing of the mission and considerably reduced French occupation in the area. Several years later, as the French sought to expand the fur trade, they built Fort Michilimackinac to re-establish a French presence in the Straits area.

Fort Michilimackinac was a strategically located fortified trading post. The fort was not built primarily as a military facility but as a link in the French trade system, which extended from Montreal through the Great Lakes region and northwest to Lake Winnipeg and beyond. Overlooking the Straits of Mackinac connecting Lake Huron and Lake Michigan, the fort served as a supply post for French traders operating in the western Great Lakes region and as a primary stopping-off point between Montreal and the western country. Fort Michilimackinac was an island of French presence on the frontier from which the French carried out the fur trade, sought alliances with native peoples, and protected their interests against the colonial ambitions of other European nations.

In 1761 the French relinquished Fort Michilimackinac to the British who had assumed control of Canada as a result of their victory in the French and Indian War. Under the British, the fort continued to serve as a major fur trade facility. The Ottawa and Chippewa in the Straits area, however, found British policies harsh compared to those of the French and they resented the British takeover. In 1763 as part of Pontiac's Rebellion, a group of Chippewa staged a ball game outside the stockade to create a diversion and gain entrance to the post and then attacked and killed most of the British occupants. The use of Fort Michilimackinac came to an end in 1781 when the British abandoned the post and moved to Fort Mackinac on Mackinac Island.

Best family value. Unlimited daily admission to all sites (including Old Mackinac Point Lighthouse) for up to two adults and all dependent kids or grandkids under 18. Includes 15% museum store discount and subscription to Curiosities newsletter.