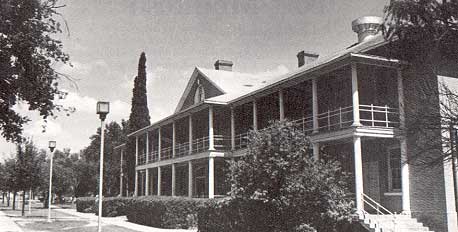 Photo of barracks taken by Charles M. Robinson, III from the book, Frontier Forts of Texas.

As you drive up the overpass on Washington Street heading west toward Laredo Community College, you step back into a different time in Laredo's history. The present college site is the location of Fort McIntosh established in 1849. It is also near the point of an old Spanish and Indian river crossing.

It is appropriate that Washington Street becomes Lamar Road named after Mirabeau B. Lamar, President of the Republic of Texas. After the Mexican War, Lamar warned of the precarious, but also important, position the city of Laredo was in and conveyed the urgency of insuring protection for citizens and territory.

Accordingly, on March 3, 1849, Camp Crawford, named after George W. Crawford, Secretary of War under President Zachary Taylor, was established on the orders of Captain George Dias, Assistant Adjutant General as requested by Major-General William Worth. Lieutenant Egbert L. Viele, the fort's first commander, had been commander of Company G of the 1st Infantry at Ringgold Barracks located near the town of Rio Grande City about 100 miles down river from Laredo. Viele holds the distinction of being the first commander of Fort McIntosh.

By 1850, the fort was renamed in honor of Lieutenant Colonel James Simmons McIntosh a hero in the Battle of Molino del Rey on September 26, l847. Forts Worth, Graham, Gates, Croghan, Scott, Lincoln, Duncan, and McIntosh were established around this time to guard the frontier. These outposts were named in honor of fallen officers in the Mexican-American War.

Since l947, the fort has served as the home of Laredo Community College. Like so many community colleges in this country, the college was founded as the need for post-secondary education increased after World War II. Through the years, many modern buildings, designed to incorporate the latest in technology and design, have been added. The latest addition, the De la Garza Building with its sunburst windows, offers us a look at the site's past as a fort looking out toward the river. Much as the Indians and Spaniards did, we do not see a boundary, but a bridge to the future.