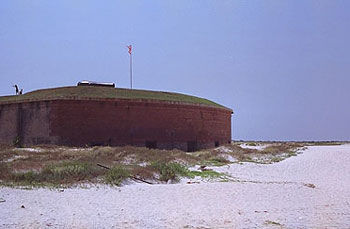 Ship Island came to the forefront of U.S. history during the War of 1812 when a British fleet assembled at Ship Island to prepare for an attack on New Orleans. The troops of Commander Andrew Jackson soundly defeated them, however. Following the War of 1812, the U.S. War Department planned for the construction of an extended system of masonry forts for coastal defense. Ship Island was considered important to the defense of New Orleans and the Gulf Coast because of its deep water harbor and location along a shipping route.

Early in the Civil War, the Confederates seized the unfinished fort on Ship Island. Federal forces regained control of the fort in late 1861 and the U.S. Army Corps of Engineers resumed construction of the fort in 1862. Federal forces used Ship Island as the staging area for their successful capture of New Orleans in the spring of 1862. A hospital, barracks, mess hall and bakery were a few of the 40 buildings constructed during the Civil War. In addition, the Army used the island as a prison camp for captured Confederate troops . It was probably during the Civil War, the fort was first called Massachusetts in honor of the Union blockade ship by the same name.

Masonry forts were designed to withstand the impact of cannonballs fired from smoothbore cannon. But, they were no match for rifled cannon, developed during the Civil War, with greater range, accuracy, and destructive power. The fort that was once a vital part of the nation's coastal defense, is now preserved for the benefit of future generations.

Construction of Fort Massachusetts stretched over a seven year period, beginning in 1859 and ending in 1866. During that time, inclement weather, the Civil War and isolation were a few of the many challenges the U.S. Army Corps of Engineers faced.

From the start, construction was hampered. Storms and gales destroyed the warehouse, pier, supply vessel and construction materials. After two years of construction, the outer wall of the fort stood only six to eight feet high. The Civil War created even are after problems. In early 1861, Confederate troops seized the unfinished fort and forced the engineers off the island. Building resumed that year after Union troops regained control of the fort. Now the work party was faced with labor shortages, limited local sources for supplies and rising labor costs. The red bricks, slate, and granite had to be shipped from the New England states. The isolation of island living was difficult. Superintending Engineer Palfrey claimed that the men were working at every disadvantage on a most disagreeable island, and in an unhealthy latitude, with the roughest provision for shelter and food.

In light of these challenges, the fort's masonry work is impressive. The ceiling of each room, called a casemate, and passageway is arched or vaulted in order to support the weight of cannon mounted on top of the fort. The outer wall reaches widths of up to eight feet. The concrete foundation extends more than nine feet below sea level. Although several million bricks were used in its construction, the fort contains more concrete than brick.

Fort Massachusetts was one of the last masonry coastal fortifications to be built in the U.S. Although the fort became a victim of advancing military technology, its beauty and craftsmanship remain as symbols of a strong, yet passive coastal defense.

Visitors can take a one-hour passenger ferry trip from Gulfport, Mississippi to West Ship Island to see Fort Massachusetts. Tours of the fort are given daily from early March through October. Visitors can hire a NPS licensed boat operator to access offshore barrier islands.

No public transportation is available in the Florida District.

Coast Transit Authority (CTA) buses stop outside the entrance to Davis Bayou at the Sav-A-Center on US-90 and Ocean Springs, MS Road. In Gulfport, MS CTA buses will, upon request, driver through the Yacht Harbor and drop off persons taking the Ship Island Ferry.