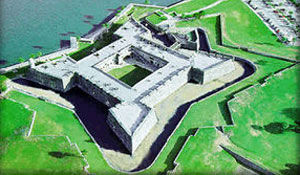 Castillo de San Marcos is a Spanish built fort located in the city of St. Augustine, Florida. It was known as Fort Marion from 1821 until 1842, and Fort St. Mark from 1763 until 1784 while under British control.

Although the Castillo has served a number of nations throughout its history, it has never been taken by military force. During the 18th century, the Castillo went from Spanish control to British and back to the Spanish, all by treaty. The Spanish remained in power in Florida until the area was purchased by the United States in 1821.

In 1837, the Seminole Indian warrior Osceola was imprisoned at Fort Marion after he arrived for supposed truce negotiations with U.S. General Thomas Sidney Jesup.

Called Fort Marion at this time, the Castillo was used by the U.S. Army until 1899. The Castillo was made a National Monument in 1924 and became part of the National Park system in 1933. In 1942, Congress restored the original name. The park consists of the original historic Castillo fortress itself with its attendant grounds, some 25 total acres.

$15 per adult for a seven day pass.
Children 15 and under are free and must be accompanied by an adult.
Castillo de San Marcos Annual Pass is available and admits the pass owner plus
any 3 adults for a full 12 months.

The Castillo de San Marcos is open to the public from 9am to 5:15pm, Wednesday-Sunday. It is closed on Thanksgiving Day and Christmas Day. Last admission is at 5pm. The park grounds are closed from midnight until 5:30am