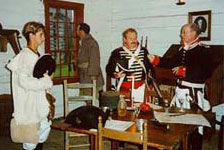 In 1808, Fort Madison, the first United States military post on the upper Mississippi River, was established in what is now the State of Iowa. In part, the fort served to protect the government "factory," or trading post, where area Sauk and Fox could exchange furs and lead for hunting knives, animal traps, blankets, iron tools, fishhooks and other manufactured goods. The post was also intended to secure the American frontier in that region.

Soldiers of the 1st Regiment U.S. Infantry, under the command of Lt. Alpha Kingsley, built most of the fort in 1808-09. Kingsley named his new post Fort Madison in honor of James Madison, the new president of the United States.

An extension to the stockade, called the "tail," leading to a blockhouse on the ridge running behind the fort, was built to protect the garrison from the arrows and musket fire of hostile Indians who might use that vantage point.

The majority of area Indians were friendly toward the fort and traded peacefully at the government factory. From time to time, however, bands of unfriendly Sauk, Fox (Meskwaki), and Winnebago menaced Fort Madison under the partial leadership of the noted Sauk warrior Black Hawk.

Following the outbreak of the War of 1812, British agents from Canada further incited Black Hawk and his allies against the Americans. In September, 1812, hostile bands of Sauk and Fox besieged Fort Madison, killed one soldier caught outside the stockade, slaughtered the garrison cattle, and burned several nearby cabins.

During the siege, the post commander ordered the burning of the factory, which was also outside the fort, to prevent the Indians from doing so on a day when west winds might carry burning debris to endanger the post buildings. A detachment of 19 soldiers under the command of Capt. Horatio Stark was sent to reinforce the fort, but, unfortunately, they arrived almost two weeks after the battle.

In July, 1813, a party of Winnebago and Sauk killed two soldiers cutting timber for a new, detached blockhouse at the fort. A week later, four soldiers of the U.S. Rangers guarding the unfinished blockhouse were set upon and killed by hostile Indians. During the following weeks, Indians frequently attacked the fort with burning arrows.

Faced with constant harassment, Lt. Thomas Hamilton, the post commander, ordered the fort abandoned in September, 1813. Under cover of darkness, the men of the garrison slipped away downriver in boats, having set fires as they departed, which left the fort engulfed in flames.

When the town of Fort Madison was settled in 1833, only the partly open cellars of some of the buildings marked the site. One hundred and thirty-two years later, in 1965, part of the cellar of the burned middle blockhouse was uncovered by chance in the parking lot of the W.A. Sheaffer Pen Company. This discovery led to excavations at the fort site by the Office of the Iowa State Archaeologist, which uncovered remains of two blockhouses, an officers' quarters and enlisted men's barracks.

Proposals to reconstruct a full-scale replica of Old Fort Madison had been voiced since 1936. Only in 1983, however, when the city of Fort Madison received the first of two government grants administered by the Bureau of Historical Preservation, Iowa State Historical Society, did the project begin. Replicas of major buildings (except the guardhouse, tail blockhouse and kitchens) were fabricated from oak timbers by inmates at the Iowa State Penitentiary, who volunteered to assist on the project. After completion at the prison, the log structures were dismantled and re-erected in Riverview Park at a point several blocks from the historic fort site, but in the same close proximity to the Mississippi River as the original fort.

Fort Madison is located in the southeast corner of Iowa, along the Mississippi River.

November to April the museum is closed but tours are offered by appointment.

Group rates available by reservation only with groups of 10 or more. To book a group tour call 1-800-210-TOUR.