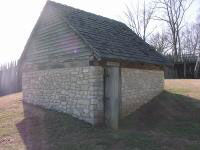 Fort Loudoun played a significant role in helping Great Britain secure the trans-Appalachian region from France during the Seven Years War, or as it is known in America, the French and Indian War. As the first planned British fort in the "Overhill" country, Fort Loudoun, for a while, helped ally the powerful Cherokee Nation to the English cause and block further French penetration of the area from the west.

Named after John Campbell, the fourth Earl of Loudoun, who was the British Commander-in-Chief in North America from 1756 to 1758, Fort Loudoun had its inception from Governor James Glen of South Carolina who saw the need for a fort among the Cherokee as early as 1746. However, it was not until the term of William Henry Lyttelton, in October 1756, that actual construction of the fort began.

Under the direction of William Gerald DeBrahm as engineer-in-charge, Fort Loudoun was painstakingly built in the wilderness during the winter of 1756-57. The garrison, under the able command of Captain Raymond Demere, was composed of 90 British regulars and 120 South Carolina militiamen. In August of 1757, Raymond Demere relinquished command of the post to his brother Paul.

Tragedy was to befall the fort in less than two years. A breakdown in relations between the British and the Cherokee, which began in the spring of 1758 on the Virginia frontier and eventually led to the execution of 23 Cherokee at Fort Prince George in South Carolina in late 1759, contributed to the surrender of Fort Loudoun. This breakdown, coupled with increasing attempts by the French to completely destroy the Cherokee-British alliance, brought violence to the southern frontier by early 1760.

With Cherokee sympathy now decidedly anti-British, the Cherokee laid siege to the fort beginning in March of 1760. The Indians effectively cut the fort's supply line through the mountains to Fort Prince George. As a result, by June, rations were reduced to one quart of corn per day divided among three persons. Although both South Carolina and Virginia mounted efforts to relieve the siege, neither effort succeeded. On August 6th, with their situation hopeless, Paul Demere asked the Cherokee for terms of surrender. On the morning of August 9th, the garrison left the fort with a party of 180 men and 60 women and children. The next morning at sunrise, the Cherokee attacked the garrison's camp, killing all the officers except one and between 20 and 30 other persons. The remainder were taken as slaves, and most were eventually ransomed by South Carolina and Virginia.

A replica of Fort Loudoun as it stood in the period 1756-60 is in the process of being reconstructed on the original site. The island offers nature trails and picnicking facilities.

We hope you will enjoy your visit to Fort Loudoun State Historic Area, and we invite you to explore our other Tennessee outdoor recreation areas. There is one within an hour's drive of every point in the state.

Located at the confluence of Nine Mile Creek and the Little Tennessee River across from Fort Loudoun, the Blockhouse built in 1794, marked a significant turning point in United States-Indian policy. In the period before the Blockhouse and its sister fort at Southwest Point were built, the frontier was defended by local militia units who made punitive raids deep into the Cherokee Nation in retaliation for Indian raids upon white settlements. What official policy existed was based upon an "eye for an eye." With the creation of the Territory South of the Ohio River in 1790, and under the humane direction of Secretary of War Henry Knox, the Federal government pursued a policy of civilizing the Indian population.

While the Blockhouse was a military fort, its primary purpose was to protect the Cherokee from continued white advances into the valley. Also, in 1796, the United States Government built a trading post adjacent to the Blockhouse to dispense supplies to the Cherokee. In addition, the Blockhouse complex served as the primary location for the War Department's Indian agent until 1801 in what is today East Tennessee.

The Blockhouse served as the site where several important treaties were negotiated. The first Tellico Treaty, signed in October of 1798, required that the Cherokee cede all lands from above the Little Tennessee River to the Clinch River to the National Government. The second treaty, signed in 1805, allowed the United States to gain title to all the land that is present-day Middle Tennessee. This treaty also spelled the beginning of the end of the Blockhouse. The 1805 treaty called for the removal of the garrison.