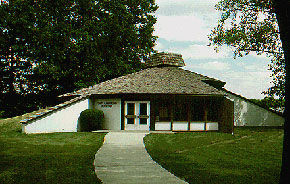 In early 1778, General George Washington prepared a military plan to attack the British. The plan was to attack Fort Detroit because the British were encouraging their Indian allies in the area north of the Ohio River to attack American settlements in the frontier region.

Due to political pressure from the states of Pennsylvania and Virginia, and the inability to secure the necessary numbers of men and supplies, the expedition’s original purpose was changed by the Continental Congress to simply attacking Indian towns and villages along the southwestern edge of Lake Erie.

Following a well-established Indian trail known today as the Great Trail, an American army of 1,200 men and their Delaware Indian guides marched west into the Ohio territory from Fort Pitt in the fall of 1778 under the command of Georgia native General Lachlan McIntosh. Twenty miles down river from Fort Pitt near present-day Beaver, Pennsylvania, Fort McIntosh was constructed to store provisions and supplies. On November 4, 1778, McIntosh departed from there to head west toward the Sandusky towns.

As they neared the end of the year and the weather worsened, McIntosh arrived in the Tuscarawas Valley. He decided to forego the attacks on the Indian towns and to build a fort near the crossing of the Great Trail and the Tuscarawas River.

He would then leave a small garrison of 172 men and women at the fort and return to the area the following spring to continue his march toward Detroit or the Sandusky Towns.

Fort Laurens was built in late November, 1778, on the banks of the Tuscarawas River near what is now Bolivar, Ohio. General McIntosh named the fort in honor of the President of the Continental Congress, Henry Laurens. The wooden stockade was approximately one acre in size. It was a quadrangular-shaped fort with four bastions approximately 240 feet from the top of one angle of a bastion to another. Barracks and storehouse buildings were located inside the walls.

Fort Laurens remained an active American military post from November of 1778 through August of 1779. During that time, the fort was clearly perceived by the British and their Indian allies in the northwest as a very serious threat. This was evident from the numerous attacks on the fort by Indians, Loyalists and British soldiers. These attacks resulted in the death of more than 20 American soldiers, who were later buried a short distance from the fort, near the fort hospital.

Just outside the Fort Laurens Museum, which houses many artifacts from the fort site, is The Tomb of the Unknown Patriot of the American Revolution. It pays lasting homage to at least one of the unknown defenders of the fort. The young man was laid to rest with full military honors from the Ohio National Guard in 1976.

Fort Laurens is, in reality, a military cemetery of the American Revolution. Rebuilding this memorial is fitting tribute to the men and women who gave their lives for America’s freedom.

In 1915, legislation was introduced in the Ohio General Assembly which required the state “to purchase for the state the lands upon which Fort Laurens is located, and such additional lands adjacent thereto as may be necessary to properly restore said fort and works...” The legislation passed the Ohio General Assembly and was signed into law by then-Governor of Ohio Frank B. Willis.

More than 80 years have passed and Fort Laurens is still not properly restored, despite the clearly stated intent of Ohio’s legislature and Governor Willis. Ohio has an obligation to meet that original goal and to honor the wishes set forth by the state’s leaders.

Members of the Friends of Fort Laurens Foundation recognize that intent and the critical need to restore this piece of Ohio history. By raising private sector funds for Fort Laurens, state authorities and those entrusted with the site’s preservation will be encouraged to move ahead with the original directive — to reconstruct Fort Laurens. A rebuilt Fort Laurens will enable present and future generations of Americans to understand, appreciate and support the historical significance it holds and the role that the fort played in history.

Further, the Foundation’s leaders are confident that a rebuilt Fort Laurens will promote economic growth and development for the northeast region of Ohio. It will encourage progress in Ohio’s other heritage communities and will provide assistance to other significant historical and cultural regionally based sites.

The entire site is handicapped accessible.