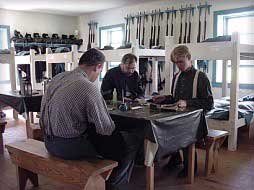 Fort Larned was established in 1859 as a base of military operations against hostile Indians of the Central Plains, to protect traffic along the Santa Fe Trail and as an agency for the administration of the Central Plains Indians by the Bureau of Indian Affairs under the terms of the Fort Wise Treaty of 1861. With nine restored buildings, it survives as one of the best examples of Indian Wars period forts. Most of the buildings including: barracks, commissary, officers quarters and more, are furnished to their original appearance. Fort Larned National Historic Site takes visitors back to this turbulent era in our nation's history.

With its nine surviving buildings built in the mid-1860s and a reconstructed blockhouse, Fort Larned is one of the best surviving examples of an Indian wars era frontier Army post. The building exteriors and parade grounds are fully restored. More than 40 interior rooms are restored and furnished in the historic period style. In its relatively unspoiled setting on a bend of the Pawnee River, the fort survives as an authentic vestige of the past. 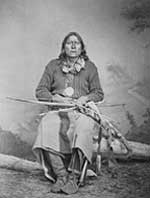 The following excerpt is from the book, Buffalo Bill and Sitting Bull, by Bobby Bridger.

Roman Nose's death stunned the Cheyenne yet Tall Bull quickly assumed leadership of the Dog Soldiers and retreated to council. Meanwhile, as the Indian Wars erupted with the Cheyenne in Kansas, Cody had a dangerous encounter with Kiowa Chief Satanta which reveals the scout's shrewdness as well as his luck. After escorting General Hazen the thirty miles between Fort Larned and Fort Zarah, Cody was returning to Fort Larned. About halfway between the forts Cody was "jumped" by forty Kiowas—men he had seen at Fort Larned earlier that day—men who had suddenly painted their faces for war. As the Kiowa rushed upon him with hands extended, however, Cody's immediate impulse was to shake hands with them, even though the war paint and rowdy manner of the Indians clearly indicated their intention was not friendly. An Indian grabbed Cody's hand and drew him and his mule in so close that he was quickly surrounded by the forty Kiowa warriors. The shouting Indians seized his guns and he was suddenly nearly knocked unconscious by a numbing blow from a tomahawk to his head. Just as quickly, the mob quirted their ponies and Will's mule into a run and headed out across the prairie.

The war party soon arrived at a large encampment and Cody immediately realized the Kiowa were no longer at peace; when he was presented before a group of chiefs, including Satanta, Cody figured he would soon be departing this realm....

...Eventually, after what seemed hours to Cody, Satanta addressed the scout, asking where he had been.

While Satanta and his warriors counciled, however, Will had time to structure a plan of action. Cody realized the Kiowas had been without meat for several weeks because of the delays ratifying the Medicine Lodge Treaty. He also knew the Kiowas had been promised cows and had been expecting a large herd of cattle for days. Cody told the Chief that he had been looking for the Kiowas' cattle herd.

This naturally piqued the old man's interest and he began to pepper Cody with a series of questions as to the whereabouts of the cows. Upon responding to the Chief, Cody led Satanta to believe General Hazen had sent him out ahead to tell the Kiowas that the cattle had finally arrived, and that a large body of soldiers accompanied the herd. The scout then saw his opportunity to divert Satanta's full attention from the ruse, and indignantly asked why Chief Satanta's warriors had treated him so disrespectfully. Knowing the incident would jeopardize his receiving the cattle, Satanta responded that his warriors were merely teasing and testing Cody's bravery as a joke. Aware Satanta was lying, Cody decided to use the ruse to his advantage and played up his rough, insulting treatment at the hands of the chief's warriors. The wily Kiowa chief figured with a large group of soldiers about to arrive momentarily it would be wise to release the scout and get the cattle peaceably.

Satanta soon freed Cody, admonishing him not to be angry with his treatment at the hands of the young warriors. When the chief obsequiously inquired if the scout needed assistance with the cattle, Cody convinced Satanta it would be best if he went alone to find the herd. Cody reasoned with the chief that the soldiers could then proceed to Fort Larned while he brought the cattle on to the Kiowa village by himself. The scout knew that he had laid out a pretty thin story and hoped to buy himself as much time as possible in order to make a run for it. To his amazement, Satanta agreed to let him leave alone, yet, as Cody suspected, a group of ten or fifteen warriors followed him and he knew the race would soon begin. Giving them a little slip, Cody put a bit more distance between the Kiowas and himself and spurred his mule into a run. The warriors promptly saw what Cody was up to and quirted into quick pursuit.

The race across the prairie was a good one. Even though Cody was mounted upon a fast mule, the Kiowas' swift ponies were steadily gaining on him; the leaders of the war party were soon less than a quarter of a mile behind!

As was the case throughout his entire life, luck rode alongside Will Cody. Fort Larned finally came into sight. The scout was even more relieved, however, to see soldiers approaching in a wagon. Cody galloped his mule up to the wagon and hurriedly announced there was a war party on his heels. The group quickly hid the wagon in the trees, took cover and waited for the Kiowa warriors to appear.

They did not have to wait long. The Kiowa war party raced into the clearing and were caught in a deadly ambush. The tables turned, the Indians whirled, scrambling for their lives. After scalping the two dead Kiowas, taking their weapons and catching their ponies, Cody and the soldiers headed to Fort Larned. Drummers and buglers, having heard the nearby gunshots, were calling troops to arms. All inside thought Satanta was attempting to capture the fort.

Facilities include a visitor center with audio-visual programs, a museum, and a bookstore to help visitors understand the causes of conflict in this turbulent chapter of westward expansion. Park rangers and volunteers provide living history programs and tours. Admission and activities are free.