Fort Laramie is a nationally significant historic site located in eastern Wyoming. The headwaters of the North Platte River were explored by American and French-Canadian beaver trappers who were the first men of European origin in the area. In 1834 William Sublett and Robert Campbell, traders operating out of St. Louis, built Fort William, the first structure to be located near the junction of the Laramie and North Platte Rivers. The post quickly became important as a base of operation for traders and trappers. The fort was sold to the American Fur Company in 1836. The appearance of the competitive Fort Platte, coupled with the rotting of log palisades, caused the American Fur Company to abandon Fort William and build a new adobe structure called Fort John. In 1845 Congress authorized the establishment of military posts along the Oregon Trail. By this authority the United States purchased Fort John in 1849 and built Fort Laramie.

Fort William, Fort John, and Fort Laramie were all important stopping off places for the increasing number of travelers along the trails to Oregon and California. The post became an oasis for the westward bound immigrants--the only outpost of civilization for the 800-mile span between Fort Kearney, Nebraska, and Fort Bridger, Wyoming. Historic trails and routes that passed through Fort Laramie, in addition to the Oregon and California Trails, were the Mormon Trail, Bozeman Trail, Pony Express Route, Transcontinental telegraph route, and the Deadwood and Cheyenne Stage Route. Fort Laramie also served as headquarters for military campaigns on the northern plains. Great Indian Councils that attempted to bring peace to the land occurred here in 1851 and 1866-68. Unfortunately, campaigns against the Indians of the Northern Plains during the last half of the nineteenth century testified to the ultimate failure of the treaties to maintain peace. Operating from Fort Laramie and neighboring posts, the Army eventually subdued the Sioux, Cheyenne, and other tribes in the area.

The fort witnessed the development of the open range cattle industry, the coming of homesteaders, and the settlement of the plains that marked the closing of the frontier. The Army abandoned the fort in 1890 and the buildings and land were auctioned off to the local citizens. More than 50 buildings during this time were moved elsewhere, demolished, or dismantled. The buildings that remain today at Fort Laramie are a result of several individuals homesteading the area and thus forestalling the disappearance of the buildings. In 1927, the Wyoming Historical Landmark Commission focused public attention of the fort and by 1936, the National Park Service representatives showed an interest in preserving Fort Laramie. By Presidential Proclamation of July 16, 1938, the fort became Fort Laramie National Historic Monument. It was redesignated a National Historic Site in 1960 when the monument was enlarged by Congress.

A Sioux warrior named High Forehead killed a Mormon's cow near Fort Laramie on August 17, 1854. The incident was reported to Lieutenant Hugh Fleming who demanded Chief Conquering Bear turn over the offending warrior. The chief refused and the lieutenant ordered his immediate subordinate, John Grattan, to press the situation.

There were only about one hundred soldiers in Fort Laramie at this time, and well over a thousand Sioux in the vicinity, which didn't stop the impatient, Indian-hating Grattan from dragging some artillery off to the Sioux village, with which to back up his demand for High Forehead's arrest.

What occurred then was what usually occurred when a white military unit was wiped out by a native force: casual and contemptuous underestimation, on the part of the whites, of native skill and will. Lieutenant Grattan came into the Sioux village with thirty-one men and an interpreter named Wyuse, who had not helped matters by putting an insulting spin on Conquering Bear's dignified remarks to Lieutenant Fleming. High Forehead stood in plain sight but was not disposed to be arrested, whereupon Lieutenant Grattan shot off his cannon, missing most of the village but mortally wounding Conquering Bear, the man who had been, throughout, the voice of moderation and good sense. High Forehead shot Lieutenant Grattan and the thirty-one soldiers were immediately massacred, along with Wyuse, who was dealt with with extreme prejudice by the outraged Sioux. The Sioux--who could probably have overrun Fort Laramie had they chosen to--took Conquering Bear onto the Plains, far away from whites, so that he could die and be buried in the traditional Sioux way. They melted into the prairies, buried their good leader, and went on with life.

...About a year after the Grattan massacre near Fort Laramie (1854), the army finally got up a punitive expedition against the Sioux, although the Sioux involved in the massacre--Brules, mainly--were by then scattered here and there across the prairies. An expedition of about six hundred men under General W. S. Harney (the Sioux were to call him Mad Bear) set out to avenge Grattan. At first they found no Sioux to punish. Six hundred men was a huge force; nothing like Harney's army had yet been seen on the northern plains. Nobody was expecting it--many Sioux bands were unaware that a large body of white men were marching across the prairie, out for their blood. Some did know, because runners had gone out to the tribes, telling them that the U.S. government wanted them south of the Platte River; those who didn't go would be considered hostile. Many Sioux bands were south of the Platte, but the Brules weren't, and neither were the Minniconjous.

General Harney, after considerable frustration, finally located the village of Little Thunder, a Brule headman then camped on the banks of the Bluewater River. There had been a good hunt; the women of the village were busy working the buffalo hides.

Little Thunder knew the soldiers were coming--it would have been hard not to know it--but he seemed to have disregarded whatever warning he received. When the soldiers arrived, there was some parleying, but only because General Harney wanted to get his troops into position. When he had them in position, he proceeded to destroy Little Thunder's village, killing nearly ninety Indians in a few minutes and taking many captives. Spotted Tail fought in this battle and never forgot the carnage he witnessed that day. 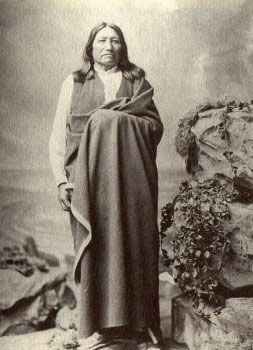 It is thought that Crazy Horse was living with Little Thunder that summer, but was out hunting when the terrible attack came. This may be the sort of rumor that makes Crazy Horse a kind of Zelig, turning up wherever the action is. Spotted Tail was so awed by the power of white weaponry that he later came to Fort Laramie and turned himself in; he served two years in jail and was probably the first of the major Sioux leaders to conclude that the Sioux could not hope to win in sustained conflict with the whites.

Most authorities think that Crazy Horse came back to what had been Little Thunder's village, saw the carnage, and rescued a young Cheyenne maiden called Yellow Woman; he took her back to her people and began what was to be a long and friendly association with the Cheyennes.

With his easy victory on the Bluewater, General Harney, Mad Bear, had essentially won control of the Platte River and the Oregon Trail. The war for the northern plains was just beginning, but this was a significant victory nonetheless. That the whites were willing, almost casually, to destroy a whole village was a new fact that the Sioux would have to come to terms with. In the warfare between tribes such a thing did not happen; there was no such imbalance of weaponry. The scorched-earth policy that General Sherman was to pursue to effectively a few years later--warfare as terror--hadn't come to the west, or anywhere else, at this time. The carnage at the Bluewater was the closest thing to it. Spotted Tail, who saw the carnage close up, from then on believed that the whites could wipe out the Sioux whenever they chose to. 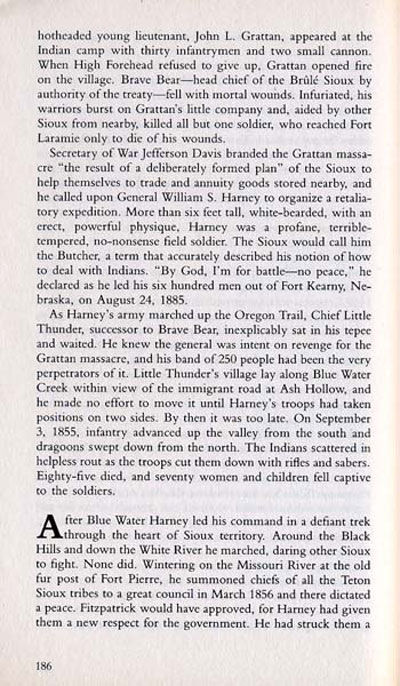 A visitor to our site gave us the following information:

I looked on Wikipedia and this is not posted anywhere. https://www.forttours.com/pages/plumcreekneb.asp That is why my note said you need to post this. Please consider.

Zenas Stevens kept a diary when he took his freight wagon trains for Count Creighton and others to Fort Laramie that followed this same route. I let them make a microfilm copy of those diaries at the Nebraska Historical Society.You might find them interesting. He named people he met along the way. He mentioned Indians following from the bluffs for days. He sent a request for help to Fort Laramie to the Provost who sent a reply he (Stevens) did not need help because he had 1 gun for every 7 Indians. I saw that piece of paper and was blown away at how it must have felt to know no one was coming.