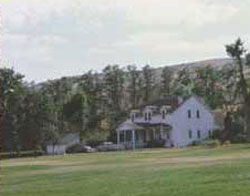 The remnants of Fort Lapwai are situated near U.S. Highway 95 in Lapwai, Idaho. Two sites are listed as part of Nez Perce National Historical Park: the duplex Officers' Quarters, built in 1883, and the Northern Idaho Indian Agency building. Troops were assigned to the Lapwai Valley in response to the gold rush. The fort was in use from 1862 to 1885. It was here that General Oliver 0. Howard met with the leaders of Nez Perce nontreaty bands on May 3, 1877, as they made one last attempt to remain on their land. The Northern Idaho Indian Agency, originally located at Spalding, was relocated to Fort Lapwai in 1904. Fort Lapwai was converted into a government Indian school and then into a tuberculosis sanitorium with a hospital, boys' and girls' dormitories, and a school. Fort Lapwai is held in trust by the Bureau of Indian Affairs (BIA) for the Nez Perce Tribe.

The agency building is owned by the Lapwai School District. The officers' quarters building has been stabilized and is vacant. The parade ground is also intact, as are some of the stables. Because of the parade ground, the site has a campus-like atmosphere.

Entrance is Free! There is no entrance or program fee for most of the sites of Nez Perce National Historical Park