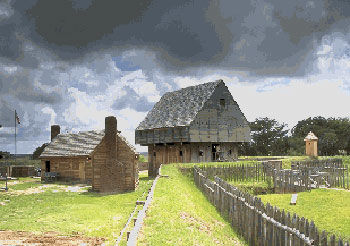 Fort King George, Georgia's first colonial British garrison, is located at the mouth of the Altamaha River and contains the brick ruins of an early sawmill operation and a small graveyard. Established in 1721 to resist the expansion of French and Spanish interests, the fort was, at that time, the southernmost outpost of the British Empire in North America. The fort was destroyed by fire in 1726 and rebuilt the following year. The surviving portions of the first sawmill are significant and offer rare examples of early colonial industry in Georgia. A museum interprets the history of the area, including the early occupation of the site by the Guale Indians. The site also includes an authentic reconstructed frontier blockhouse which provides visitors excellent views over the marshes of the Altamaha River.

None on site. A variety of camping and lodging facilities available in the area.

Reservations for all groups should be made at least two weeks in advance.