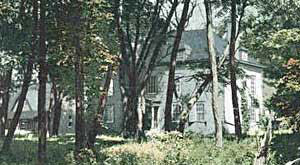 Old Fort Johnson is located at the corner of Routes 5 and 67
One mile west of Amsterdam, NY

The history of Fort Johnson and its builder, William Johnson, began with his arrival in America from Ireland in 1738; when he was 23 years old and was to oversee his Uncle Peter Warren's land holdings south of the present day city of Amsterdam, in the colony of New York. Despite his promise to his uncle not to start a settlement of his own, William purchased a tract of land north of the Mohawk River in 1739; he moved there, building a house in 1743 called Mount Johnson; here he developed a fur trade that became the basis of his fortune. William Johnson soon became involved in colonial politics; he provisioned British military posts, kept the Indians friendly to the British, served in the New York colonial legislature, and in 1756 was commissioned Superintendent of all the affairs of the Six Nations and other Northern Indians.

William Johnson constructed a larger house for himself and his family; acting as his own architect, Johnson built a large three-story stone house about a mile west of his first home; following the Georgian style of architecture, it was finished in 1749 and was to be called Fort Johnson. Along with the house, grist mill and out buildings were on the property; structures flanked the house on the front and were fortified as a means of defense from attack by the French.

With Sir William's removal to Johnson Hall in 1763, Fort Johnson was given to his son John, who married Mary Watts, a member of a prominent New York family; John occupied the Fort until 1774, when upon Sir William's death, John inherited the baronetcy and moved to Johnson Hall.

Seventeen hundred seventy-five saw the outbreak of the American Revolution and Sir John Johnson's decision to remain loyal to the British Crown; Sir John was attainted a traitor, and he and his family fled to Canada; all Johnson property was confiscated, with Fort Johnson seized by the Tryon County Committee of Sequestration in 1777; and Fort Johnson and all the furnishings were sold at auction.

Throughout the nineteenth century the house passed through many hands; in 1905, the Fort was again for sale; it was purchased by Brigadier General John Watts DePeyster, a Great-Nephew of Lady Mary Watts, and given to the Montgomery County Historical Society.

NYS thruway Exit 27, turn right onto Rt. 30, Over bridge into Amsterdam, Turn left at the Library onto Rt. 5 west.

We are open for tours mid-May to mid-October, Wednesday through Saturday, 10am to 4pm (last tour 3pm)
Sunday hours are 1pm to 5pm
The site is closed for tours on most major holidays
Group tours are available up request. Please call 518-843-0300 or e-mail [email protected] for more details.

A small admission donation of $5.00 for adults is charged. Children under 12 are admitted free.