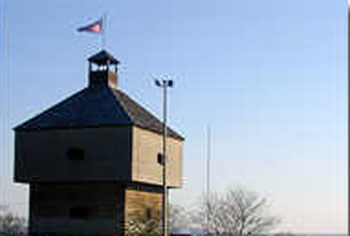 In 1806 this portion of Georgia was the western frontier of the United States. The Creek Indians had not been particularly peaceful since 1770's, when the colony of Georgia pulled a fast one on their leaders by negotiating a treaty with a lesser chief.

For 20 years the Creek struggled to regain the land taken by Georgia and only the able handling of the situation by Indian Superintendent Benjamin Hawkins kept the radical factions of the Creek Nation from revolting. After Hawkins got an additional cession from the chiefs in 1805 the fort was built to protect the settlers. Hawkins personally selected the site for the fort that would bear his name.

For 15 years this federal military outpost watched for problems that might arise, but none did in this area. During the War of 1812 and the concurrent Indian Wars the outpost served as a supply hub for military operations. Later Fort Hawkins was the embarkation point for federal soldiers leaving to fight in the First Seminole War. As the westward push of the settlers negated the effectiveness of the fort, locals began to call the area around the fort "Newtown."

During the time that the fort saw active duty the most famous people to visit (other than Hawkins) would be almost-president Aaron Burr, future president Andrew Jackson and Supreme Commander of the United States, Winfield Scott. A Georgia hero, Daniel Appling, for whom Appling County was named, was stationed here prior to the War of 1812.

In 1822 the fort was decommissioned, and over the next century dismantled. In 1938, according to the city of Macon web site, the Nathaniel Macon chapter of the Daughters of the American Revolution and Franklin Delano Roosevelt's Works Progress Administration rebuilt one of the two blockhouses on the exact site of the original fort.

A stockaded fortification, Fort Hawkins consisted of slightly less than an acre and a half of enclosure, surrounded by a much larger area of cleared land. Inside the fort were two three-story blockhouses. The lowest floors were built with stone, for storage of food and munitions.

Way back in 2002, after years of negotiations with the Shriners, the City of Macon purchased the property, with the intent of rebuilding the fort in time for the bicentennial.

Fort Hawkins is a three-story museum (located in the reconstructed blockhouse), filled with information on the fort, Benjamin Hawkins, the Creek Indians and period artifacts. It is maintained by the city of Macon and located in the appropriately named "Fort Hill" section of Macon, near the Ocmulgee Indian Mounds. The Lower Creek Trading Path, which is now known as Emery Highway, ran directly in front of the fort.